As well as having the youngest population in Europe, Dublin is also a UNESCO city of literature thanks to a near endless list of resident writers, and with a busy, international airport just a short drive away, it’s also perfectly placed for the start of an adventure.

So if you’re willing to give up time in one of those 1,000 pubs, or if you’ve seen them all and somehow lived to tell the tale, then here are ten epic adventures that you could be leaving on direct from Dublin airport – from canyoning fast flowing gorges to chasing the Northern Lights.

1) Trek the Via Dinarica Trail from Croatia to Bosnia

These rock rings are a phenomenon known as Brigand’s Door.

Over eight days you’ll hike the famous Via Dinarica trail, voted one of National Geographic’s best destinations in 2017. You’ll follow the blue-green waters of the Krupa River, climb deep into the Dinara Mountains, cross into Bosnia and ascend the 2,118-metre summit of Mount Vilinac and then descend into the long, flat, flower-covered valley of Studeni Fields.

When to go: June to August – Perfect hiking weather. 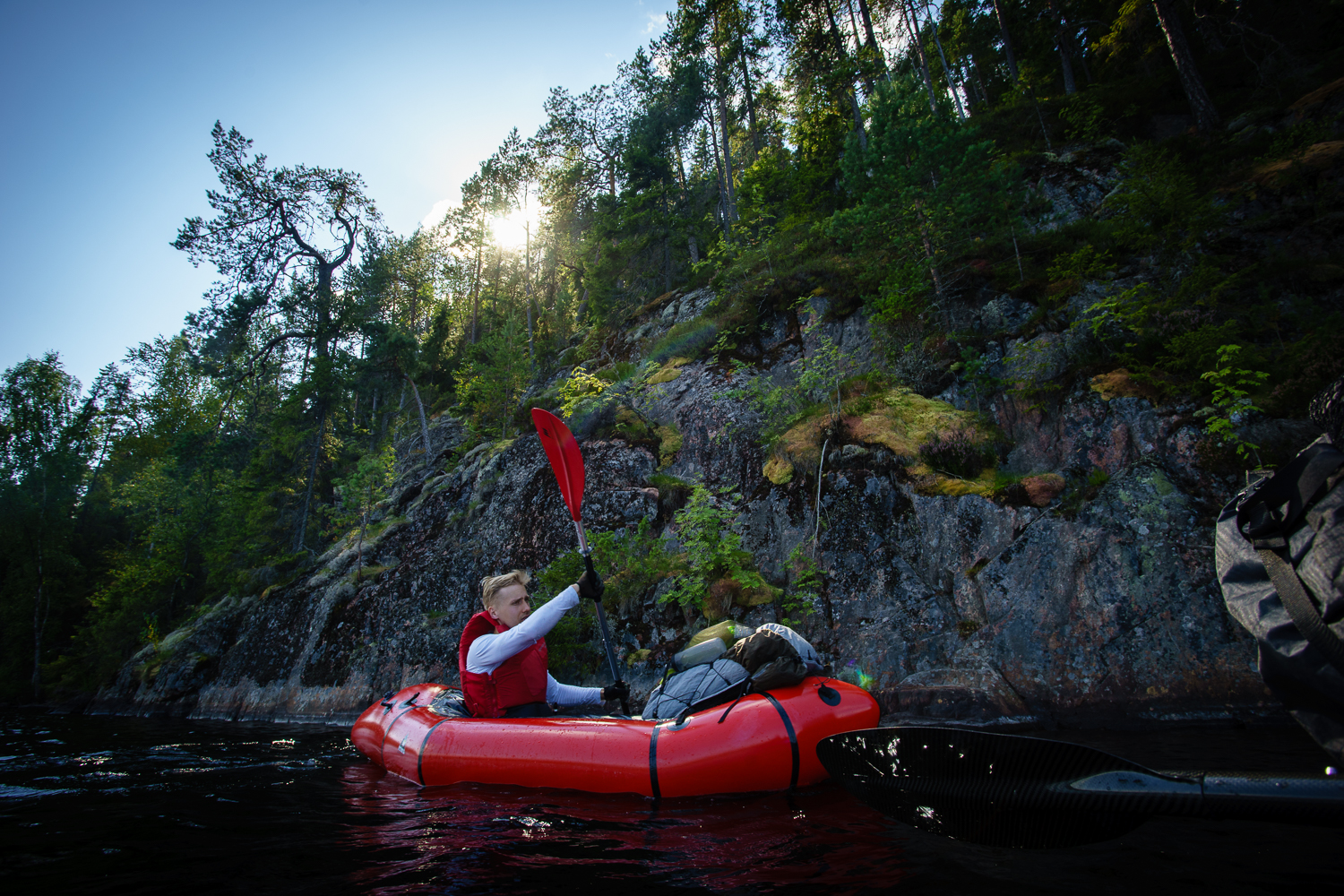 You’ll paddle past the famous Helvetinkolu crevasse or the crevice of Hell.

Get back to nature and travel a remote wilderness of lakes, canyons and deep gorges. Known as the land of a thousand lakes, you’ll travel across the water in lightweight, inflatable packraft, hike through a boreal forest, camp and cook on deserted beaches and unwind in a traditional Finnish sauna right by the water.

When to go: July to October – Short nights and starry skies.

3) Kayak the Wild Coast of Corsica 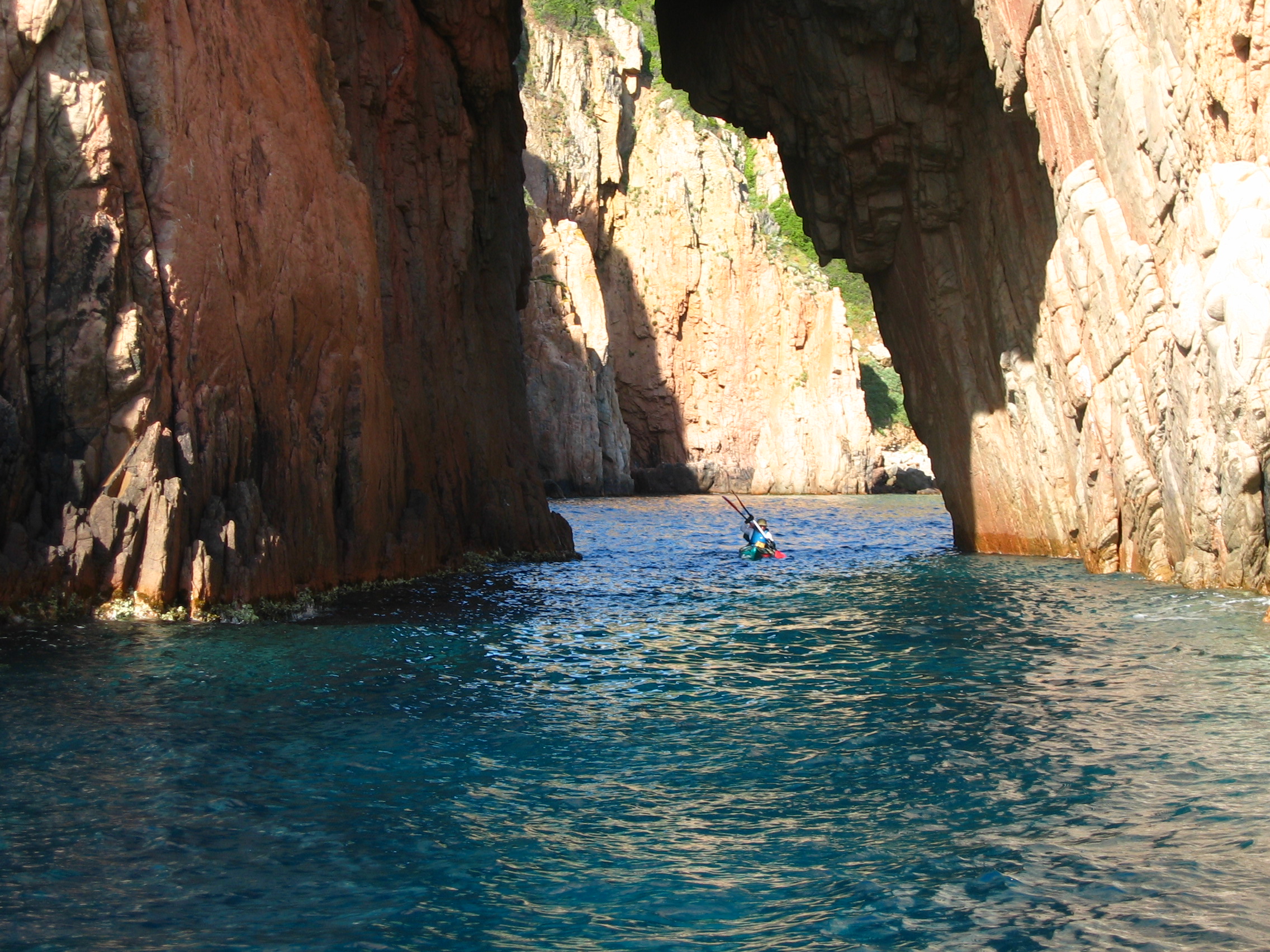 The rock arch en route to Girolata, a World Heritage Site village accessible only by the sea.

Paddle the ever-changing landscape of the rugged north-west coast of Corsica.  Over seven days you’ll kayak the Gulf of Sagone, discover sea caves and hidden bays, navigate around the red granite cape at Capo Rosso and explore narrow passes that seem to change colour as the sun sinks toward the water.

Don’t miss: A visit to Girolata, a UNESCO world heritage village, accessible only from the sea.

When to go: July to September – Calm, clear water and long, sunny days.

4) Canyoning and Hiking on the Montenegrin Seaside

You’ll belay, jump, slip and slide your way through the magnificent Medjurecki Canyon.

Tackle the fast-flowing waters of the Medjurecki canyon and then recharge on the beach. You’ll hike through a forest of black pine deep in the Montenegrin highlands, visit fortified towns and World Heritage Sites and then test yourself against one of the best canyons in the Balkans.

Don’t miss: Sliding down a waterfall into a deep, blue natural pool.

When to go: July to September – Warm weather, cool water. 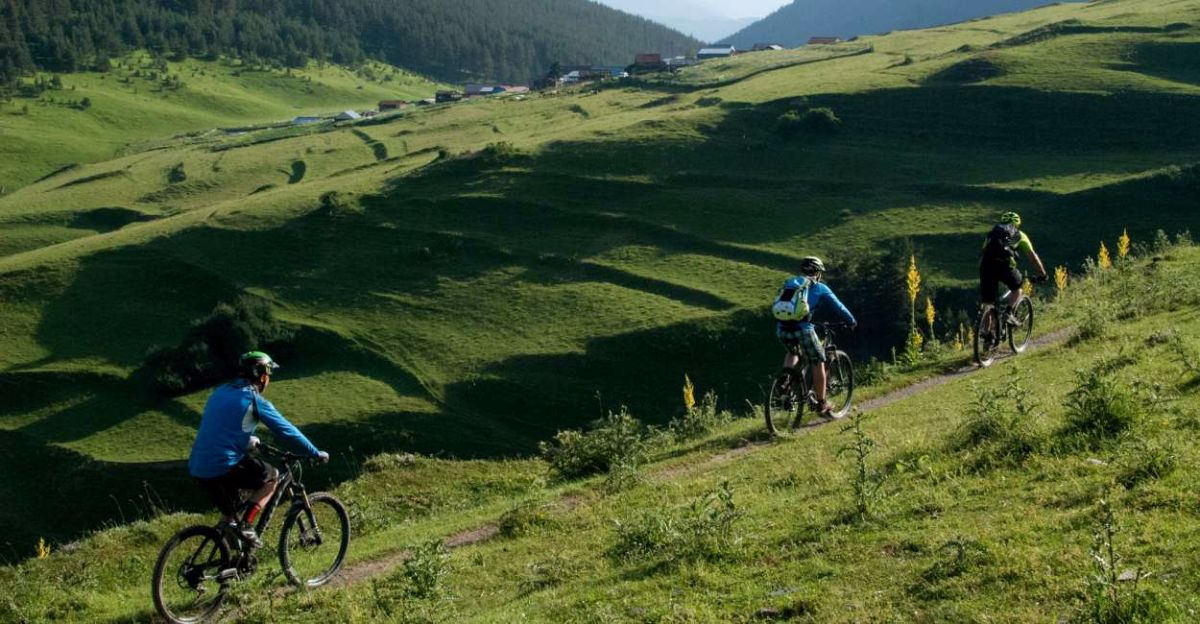 Are they going up or coming down?

Explore the heart-stopping off-road trails and wild landscape of Georgia’s High Caucasus Mountains whilst they’re still flying under the travelling radar. You’ll bike through the Abano Pass, 2,900 metres above sea level, cross the Kakhetian plains and follow sheep tracks, back routes and challenging single-track to remote villages and incredible views.

When to go: May to September, when all the tracks and passes are open.

6) Raft the Lousios River in Greece 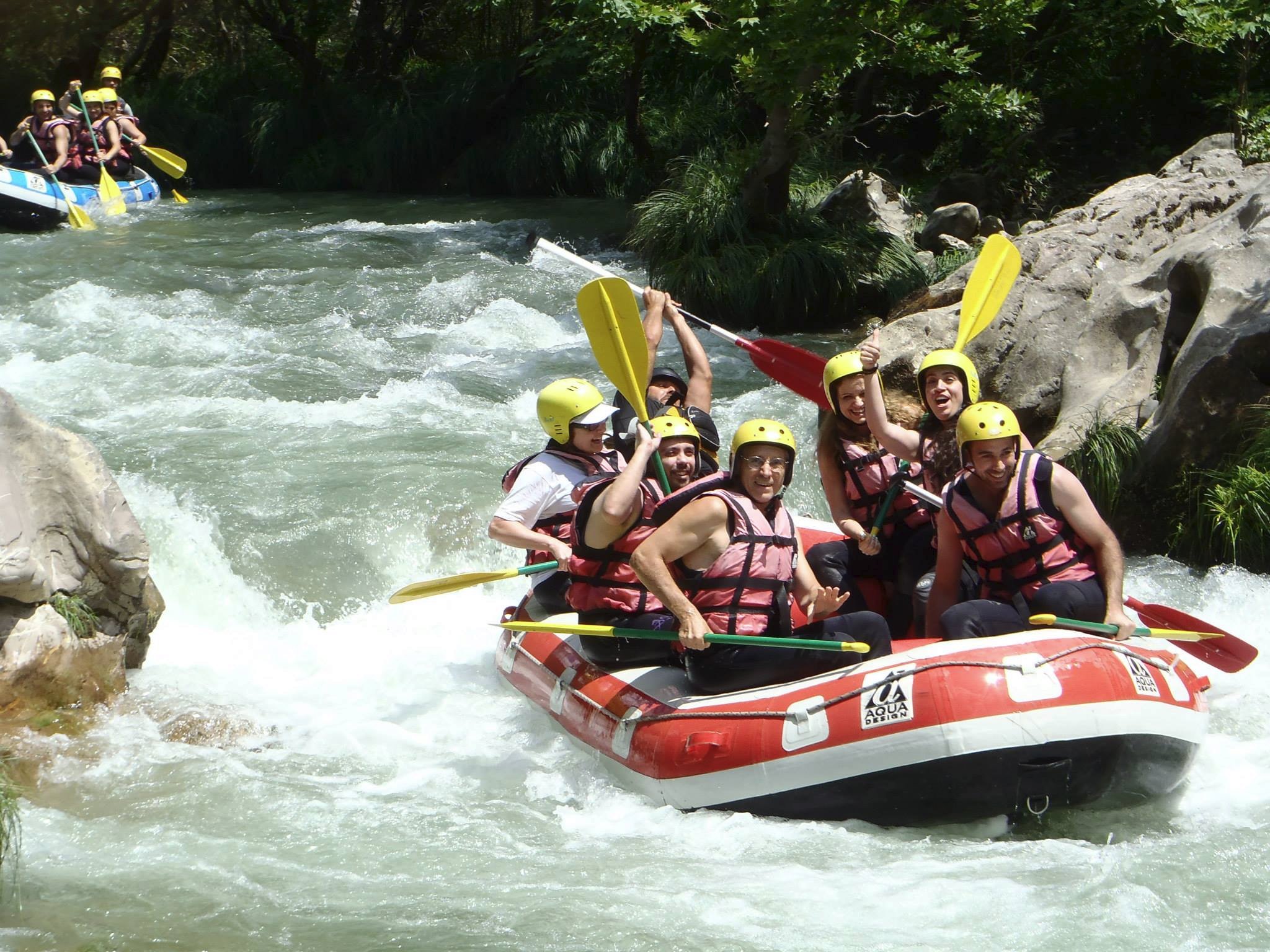 Strap on your helmet and raft downstream through one of the most beautiful regions in Greece – the Peloponnese. You’ll travel through a lush landscape that’s at the heart of countless Greek myths, stay in a tiny mountainside village (population 342) swim, splash and then eat and drink in local guesthouses.

Don’t miss: The short hike to the gorgeous Vrondos Waterfall.

When to go: July to September – so, so green.

7) Walk the Countryside and Explore Ancient Cultures in Italy 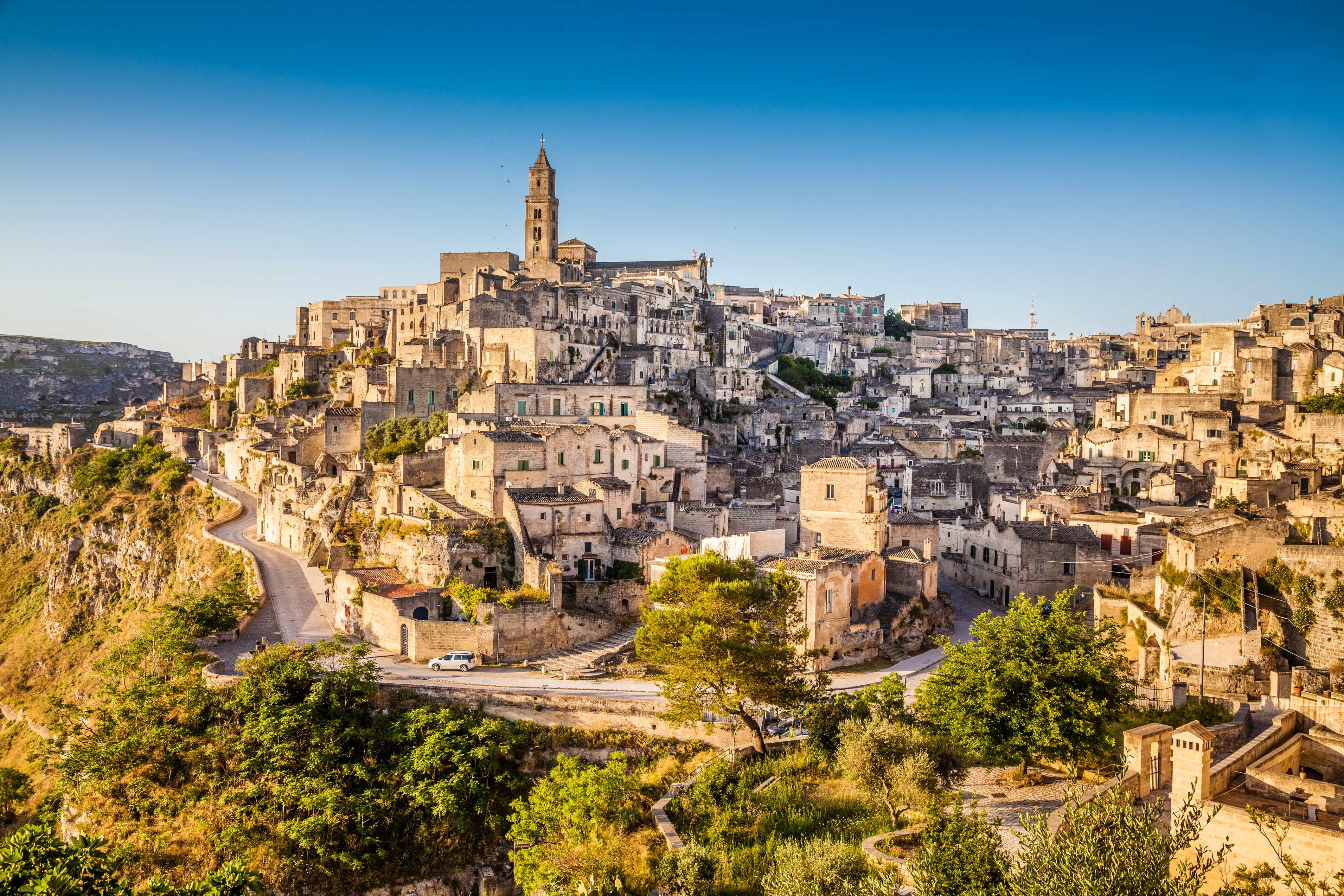 Hike the Basilicata and Puglia regions of southern Italy, home to long views and ancient history. On a series of guided walks, you’ll visit the uninhabited city of Sassi of Matera, first carved out of the bedrock in 7000 BC, ascend the Murgia Timone plateau and explore the vineyards and olive groves of the beautiful Valle d’Itria.

Don’t miss: Historic Matera – one of the most photogenic towns in the world.

When to go: September or October, as the weather begins to cool after a long, hot summer. 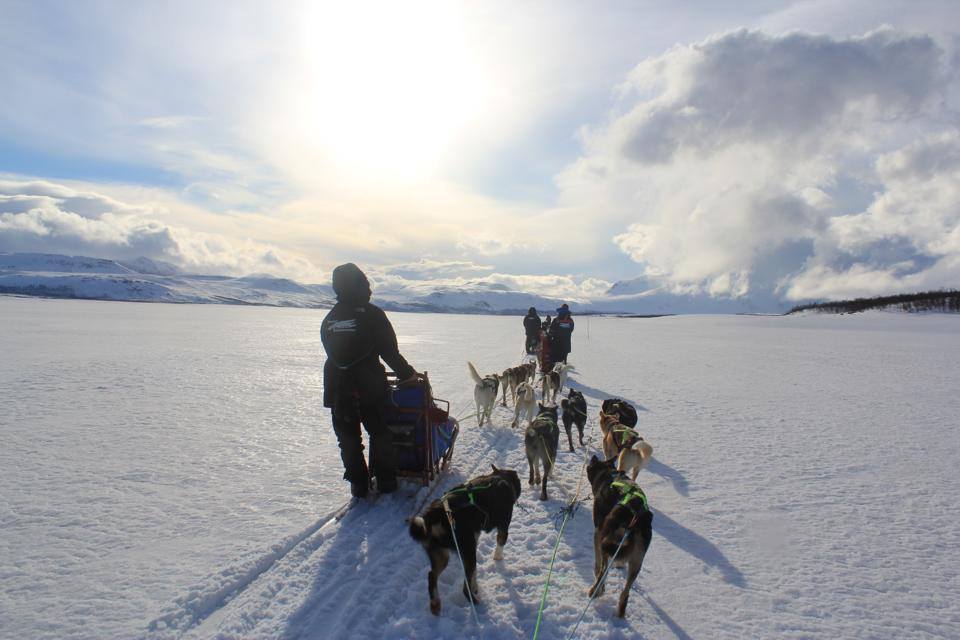 You’ll learn how to gear up your own sled, then head out across the tundra either as the passenger or driver of your own crew.

Get to know the local Sami people as you drive a dog sled deep into the Arctic Circle. You’ll ride across the tundra, spend the night in a warm, communal tent and hunt for the Aurora Borealis across an untouched northern wilderness.

Don’t miss: Playing with husky puppies beside the campfire.

When to go: For the best chance of seeing the Aurora, go from November to January.

9) SUP, Hike and Paraglide in Slovenia

Delve into Europe’s wild side in an action-packed four days in Slovenia. You’ll paddleboard the waters of the Emerald River and through the heart of Ljubljana, hike to the dramatic Tolmin Gorge, get a photo at the Devil’s Bridge and then explore the vineyards of the Vipava Valley.

Don’t miss: Paragliding over Slovenia’s wine country with views all the way to the Adriatic.

When to go: August or September – warm and sunny, with temperatures averaging 23 – 28 °C.

10) Surf, Cycle and Tapas in Andalucía

Combine waves, mountain tracks and irresistible Spanish food as you explore the laid-back Costa de la Luz region of Spain. Have a surf lesson (if you need one) at the beachside town of Conil de la Frontera, take a tour of the local tapas bars and then ride a mountain bike across 25km of incredible Andalucían scenery.

Don’t miss: Another plate of tapas? OK, one more, why not.

When to go: September or October – Cooler weather and blue skies.

Or you could catch up on the washing. However, if you’re in need of an adventure explore our other hand-crafted trips with only the best local hosts and guides.

GET THE MUCH BETTER NEWSLETTER