Nearly 60% of Slovenia is covered in lush green trees and forests, and when you consider the picturesque lakes, the crystal-blue rivers and the seemingly endless waterfalls found throughout the country, it’s no wonder Slovenia, a country with a population of just two million, is becoming a bit of a hotspot for adventurers looking to tread off the beaten track.

Of course, it’s not completely void of tourists. The legendary beauty of Lake Bled attracts flocks of travellers each year, particularly in the summer months – and for very good reason too, it’s one of the most stunning spots in Europe – but treat yourself to a trip to Lake Bohinj, into the skies above Ajdovščina or along the inimitable Soča River and you’ll find yourself amongst similarly breathtaking scenes without the crowds in accompaniment.

Here are a few of our top picks for the best alternative adventures to try out in Slovenia.

There’s a saying in Slovenia, coined by former president Milan Kucan, that you’re not a real Slovenian until you’ve climbed Mount Triglav – the eponymous 2863m peak at the centre of Triglav National Park and the highest mountain in the country. Similarly for travellers, you can’t say that you’ve seen the best of Slovenia until you’ve been to the summit of the land.

Few people love their highest mountain like the Slovenians love Triglav. It’s even immortalised on the coat of arms on their national flag.

The ascent is typically done in two days, and the mountain can be accessed from Bled, so you’ve still got the chance to check out the lake before you head off. The via ferrata route to the top makes the climb slightly – emphasis on slightly – less daunting, and is one of the most famous in Europe. Expect to be pushed a little outside your comfort zone if you’re not accustomed to climbing rocks, but if you’re looking for an accessible challenge, a bucket list moment and some remarkable views, look no further than Mount Triglav.

2. Swimming and Hiking in Lake Bohinj 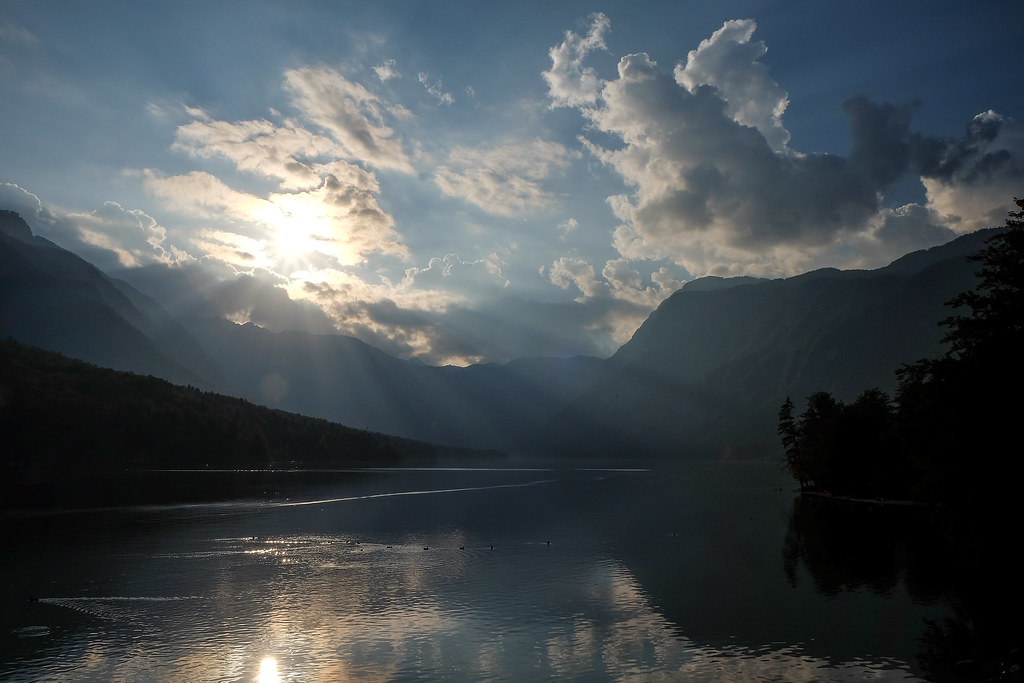 If Lake Bled is the postcard Prom Queen of Slovenia then Lake Bohinj is her criminally underappreciated but equally as breathtaking big sister – the largest permanent lake in the country at 318 hectares with a tranquillity and peacefulness Lake Bled can no longer offer.

The scenery at Lake Bohinj, in a valley in the Julian Alps, will take your breath away. Just a short walk or drive from the quaint town, you’ll arrive on the shores of a lake banked by steeply sloping green forest. The only people you’ll find there will be locals, swimmers or hikers.

We’d say that you’ll be swimming beneath views that’ll remind you of Jurassic Park, but that comparison is probably used a bit much these days, so let’s say Jurassic Park reminds us of Slovenia instead (but don’t worry, no dinosaurs). For a special treat, get up early for a swim and enjoy the sunrise over a 785-acre lake along with only a handful of other people.

The Soča Valley could claim to be the adventure capital of Slovenia, between the hiking and mountain biking that looks down over Italy and the rafting and canyoning that can be done in the hypnotic sky-blue waters of the Soča River.

The Soča River offers probably the best rafting in the country too. And there’s something for everyone. You can take on II, III or III+ rapids, giving you as much or as little of an adrenaline burst as you want.

Just make sure that when you’re out on the water you remember to listen to your guide – it can be easy to get caught up looking at the otherworldly river flowing between the old stone walls and forests. You’ll probably need to look twice before you realise it isn’t photoshopped.

4. Paragliding Over the Vipava Valley

There’s a good chance you’ve never heard of Ajdovščina before, despite it being just an hour’s drive from the Slovenian capital Ljubljana.

There’s also a good chance that you have no idea how to pronounce Ajdovščina. Well, local craft brewer Pelican Brewery have come to the rescue on that front. The brewers have an award-winning beer called ‘Out of China’, named after the phrase they use to teach people how to say the name of the town. And renowned craft beer isn’t all you’ll find in Ajdovščina. Despite having a population of just 6,500, you’ll find some of the finest cuisine, hiking and mountain biking trails and the most consistent climate in Slovenia.

The small town is walled off by enormous mountains on every side, and as a result, Ajdovščina enjoys a microclimate guarded against the harsh winds.

The best place to experience all this? From the air of course. The valley is an incredibly popular stop for paragliders. On any given day you’ll see more up in the sky than you can count on two hands, and it’s not hard to see why. From the sky, you can see not only out over the stunning Slovenian scenery but on a clear day, you can see all the way to Venice.

We already mentioned that Slovenia has the type of terrain that you could easily enough confuse with Jurassic Park. Well, one thing we think there should be more of in the Jurassic Park franchise is canyoning. Think about it. All that jungle. All that water. There must be heaps of waterfalls and hundreds of rivers on that island waiting to be explored. Maybe it’s the tendency of the attractions of the park to escape and eat the visitors that have stopped an adventure tourism brand opening up there of course – but anyway, enough about dinosaurs. What we’re trying to say is that Slovenia has some of the best canyoning in Europe, and no matter where you’re staying, you’re probably not far from the action.

From Bled or Bohinj you can head out to the Grmečica canyon. Think big stony, dark canyon walls, with abseiling and jumps from three metres all the way up to 10 into deep pools of water. And it’s only a 50-minute drive (and a bit of a hike with the wetsuit!) from Bohinj or Bled.

Alternative options include canyoning in the nearby Jereka canyon, perfect for those looking to get some beginner skills, or canyoning in the Soča River, where you’ll get jumps just as big and possibly even less people on the river.

The key to enjoying Lake Bled is getting off the sides of the lake and away from the crowds – as beautiful as the views might be – and onto the water itself.

You can stand-up paddle out to the famous island and visit the picturesque Church of the Mother of God in no time at all, finding your zen as you paddle, alone on the water, away from the tourists and with the fresh air, sunshine and spectacular views all around. It really is one of the moments that makes you glad to be alive and leaves a lasting smile.

Alternatively, if you’re up to the challenge, ditch the board and swim out to the island church. You’ll need to be a good level of swimmer to make the journey, but there are always a bunch of keen enthusiasts who do it every day, and the look round the famous Gothic church at the end is even more rewarding once you get there. 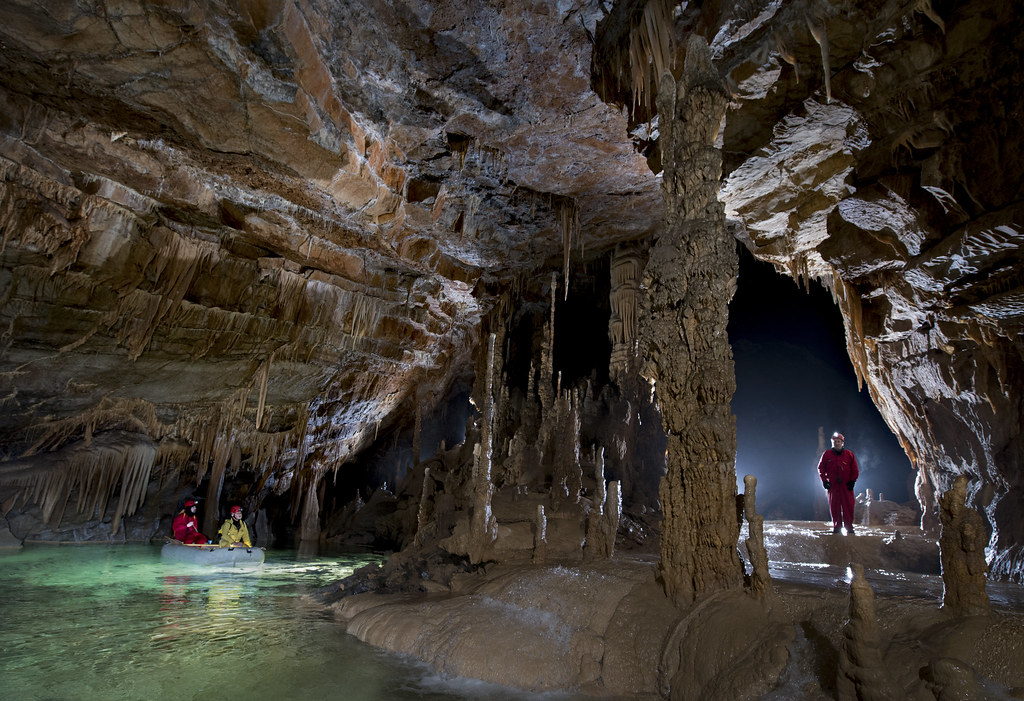 When it comes to caves and stone valleys in Slovenia the first thing most people think of is probably the Vintgar Gorge, where you can check out some of the biggest waterfalls in Slovenia and look into caves from beautiful boardwalks. It’s an amazing experience.

What’s even more amazing though is actually getting inside some caves, and Križna Cave in Slovenia’s Lož Valley is one of the most beautiful in Europe.

Descending into the dark on a raft, you’ll float past an array of stalagmites and stalactites, and as the stunning water is replaced by stone and you get back on foot, you’ll find yourself looking upon the ancient remains of a cave bear.

Unfortunately, there are no live cave bears left – they, unfortunately, died out over 24,000 years ago, or so we’re told, we weren’t around at that time – but it’s a once in a lifetime experience to see some unique history in an unforgettable setting.

Last but not least on our list is the capital city of Slovenia – vibrant Ljubljana. As well as a fantastic tongue twister for the uninitiated, the city is known for its green spaces and the quaint Ljubljana River which curves round the city.

Explore the pedestrianised streets of the city centre at your own pace, stopping for some local cuisine or some of the finest wine in Europe, before hiring a bike to casually explore the area or better yet, get a stand up paddle board to cruise along the river, under the gaze of the Ljubljana Castle, the dominative city landmark and a great place to end your trip.

Discover all this for yourself on one of our hand-crafted adventures in Slovenia with only the best local guides and hosts. All the fun, none of the faff.