To reach my favourite wild swimming spot, you need to walk down a footpath that traces the river. You’ll come across a quiet mill pond in a clearing. Once the shock of the cold water abates, it’s relaxing to float on your back and look at the dappled light as it shines through the trees.

I’m happy to describe this spot, but I won’t tell you where it is. Maybe it’s because the act of wild swimming feels so intimate. Or maybe it’s because I live in a small city, where quiet swim spots in walking distance are few and far between. However I package it, the answer is simple. I’m being selfish - trying to keep something for myself.

I’m happy to describe this spot, but I won’t tell you where it is.

It made me wonder: are my protective instincts a way of looking after the natural world? Or am I simply denying other people access to something that I claim for myself? I decided to see what other swimmers thought.

Kate Gillwood runs an open water swim coaching business, Swim Freedom, and lives in Edinburgh. She also writes about swimming spots she's visited on her blog, Diary of a Wandering Swimmer. Despite her regular dips into oceans and rivers, she wouldn’t necessarily refer to herself as a ‘wild swimmer’.

“I just call it swimming,” she says. “I'm of an age where we just used to swim outside and you didn't have wetsuits and changing robes and god knows what else. My mum just used to take us down the river when we were kids.”

During the pandemic, interest in wild swimming boomed. According to Google Trends, in July 2021 there were more than double the number of searches for “wild swimming in the UK” than in July 2019. The mental health benefits of cold water swimming were no doubt a release for people during the pandemic - the shock of the cold produces cortisol (a stress hormone), followed by a rush of endorphins. And leisure centres being shut will have increased those numbers too.

“The number of swimmers on the beach here at Portobello has just exploded,” Kate says. “I think it's brilliant. Go for it. Carefully. There are people who have been swimmers here for a while and who have felt very imposed on. But I feel that the beach isn't mine to own, so I welcome people swimming there.”

The Scottish Land Reform Act of 2003 (better known as the "right to roam"), allows the public access to bodies of inland water, providing they exercise that right responsibly. As Kate sees it, she can’t prohibit anyone from having a dip.

"I feel a little bit irritated when I hear people say ‘it's a secret place, I'm not telling anyone.’ If it's not in your own back garden or on your own private land then it's not really yours to keep," she says.

Kate believes that rural spaces are in danger of becoming increasingly privileged access sites. She’s backed up by the data. A recent Ramblers’ report, The Grass isn’t Greener for Everyone, reported that the richest 20% of areas in England had five times as many green spaces as the most deprived 10%. What’s more, only 1% of visitors to National Parks are from a BAME background.

In other words, we shouldn’t be claiming wild places as exclusively ours - everyone should have equal opportunities to enjoy them.

I feel a little bit irritated when I hear people say ‘it's a secret place.’ If it's not in your own back garden or on your own private land then it's not really yours to keep.

While Kate readily admits that she doesn’t really like swimming with crowds, she doesn’t mind finding a quieter place to swim by herself. What she dislikes is the environmental impact of increased traffic to wild swim spots.

“It's not unusual to get people, who are unused to being outside, treating the countryside less respectfully. Leaving litter really bites me. That's when I start to feel ‘why are people allowed to go there if they don't look after the countryside?’,” she says.

However, she doesn’t believe that the solution to the problem lies in restricting access. Rather, it’s about encouraging responsible behaviour, whilst raising awareness of the issues.

“When you swim, be respectful of people; those who live in the area and people who might be coming out for the first time. And be respectful of the environment. It sounds like a very en vogue thing to say but it was how I was brought up - you don’t drop your litter about and mess things up,” she says.

Laura Owen Sanderson started wild swimming in earnest after a health scare in 2015. "I went to A&E," she says. "I literally died and they brought me back to life. I remember thinking ‘I’m actually dying,’ and being really annoyed about it, for not seizing the moment more."

She quit the rat race. Began spending more time outside in Snowdonia, where she lives. Then she was diagnosed with fibromyalgia. It made her feel stiff and achy all over, as if she were a “hundred years old.” After being told to try a cold shower by her doctor, she went for a swim in the sea nearby.

“It really helped me, and I was hooked. It’s utterly addictive,” she says.

Laura founded We Swim Wild, a not-for-profit company which encourages people to swim for wellbeing, with a particular focus on marginalised groups. She’s currently working with LGBTQIA group Be Out & About, and is running a swim safety workshop at Out & Wild, their wellness retreat for queer, nonbinary and curious women.

She believes everyone should be allowed to access wild spaces. However, like Kate, she has seen first hand how these spaces can be ruined by an influx of people.

“There are some places in Snowdonia which have become completely destroyed during the pandemic,” she explains.

“One example is the Blue Lagoon. It got really popular. The last time I went there were ghetto blasters everywhere, people floating in the water on inflatable flamingos. The landowner ended up having to close it to the public. He told me he had to pick up 30-40 black bags full of litter that day, including human shit.”

For this reason, We Swim Wild doesn’t reveal the locations of its swim spots, or geotag them on social media. If it does, they’ll normally be places that can withstand a higher footfall, such as a public beach.

As soon as you put the word ‘secret’ in front of a wild swimming spot and publish it online, it becomes really crowded...

“As soon as you put the word ‘secret’ in front of a wild swimming spot and publish it online, it becomes really crowded. I’ve seen firsthand how groups of 30-40 people will come out to swim at these places. And sometimes they don’t swim at all; it’s all about grabbing a photo for Instagram,” Laura says.

However, Laura understands why people use social media and Instagram’s geotagging function to find places to swim.

“It’s so hard to know where you are allowed to swim, that when you see something being publicly posted as a good location you feel more secure about going there,” she says.

According to River Access for All, there are 42,700 miles of river in England and Wales, but only 1,400 of these have a right of access. According to Nick Hayes’ The Book of Trespass, the government spends only £2000 per year publicising the Countryside Code. Laura believes that these two factors are the root of the problem.

“I’d love our rivers to be a free-flowing highway for everyone to use,” she says.  “Of course, there’d need to be more energy spent on raising awareness about how to look after the countryside - it’s been really underfunded in the past.”

I’d love our rivers to be a free-flowing highway for everyone to use...

Raising awareness of our watery environments would encourage people to take greater care when visiting them.

“I don’t mean saying ‘you can’t do this, you can’t do that’ to people,” Laura says. “I believe positive, mindful campaigns have more of an impact.”

Several such campaigns are already underway, from the British Canoeing Association’s Clear Access Clear Waters to We Swim Wild’s Waterloggers project (which raises awareness of microplastics).

So, should wild swimmers keep their spots secret? It seems that in a world of clearer waters and more equal access, wild swimmers would be far less precious about sharing their spots. Until then, the subject of secrecy is open to debate.

Inspired? Check out our wild swimming holidays in the UK and beyond! 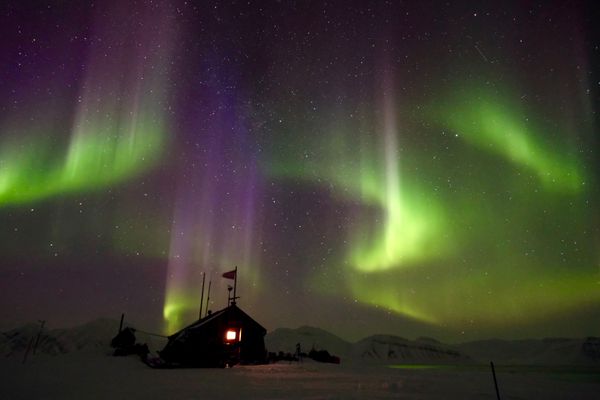 'Hearts of Ice' is a conservation project with a difference - it started life in a remote hut in the Arctic... Take a swim on the wild side. Whether you're a seasoned outdoor swimmer or new to taking the plunge, we've got just the adventure for you