Women did not ride bicycles in Afghanistan when American adventurer, author and activist Shannon Galpin first travelled to the country in 2008. Many women didn’t leave the house or get an education at all. Many still don’t.

The Taliban fell from power in Kabul, the capital of Afghanistan, in November 2001. During their regime women could be killed just for riding a bicycle. After their defeat, there was a notable progression, but it only went so far. Women regained the right to work, travel and compete in sporting events. There were even women’s national teams for, amongst other things, boxing and taekwondo – but cycling, as Shannon puts it, was “the last taboo”.

“They know the risks better than anyone else, because just being a girl in Afghanistan is a risk.”

Shannon travelled to Afghanistan after starting a nonprofit with a focus on gender violence and women’s rights.

“I picked Afghanistan because it was the worst place in the world to be a woman,” she tells us, shortly before telling her story to the crowd at the Edinburgh Festival of Cycling.

Shannon travelled around Afghanistan by bike, motorcycle and car. As a foreigner, she experienced none of the issues or abuse that a native woman in Afghanistan would for doing similarly, and in 2009, she became the first person, male or female, to ever go mountain biking in Afghanistan.

“I saw men and boys on bikes all over the country,” Shannon says. “But I never saw any girls. I was allowed to get away with a lot as a foreign woman. The men afforded me a lot of respect and a lot of curiosity. They treated me as an honorary Afghan man. 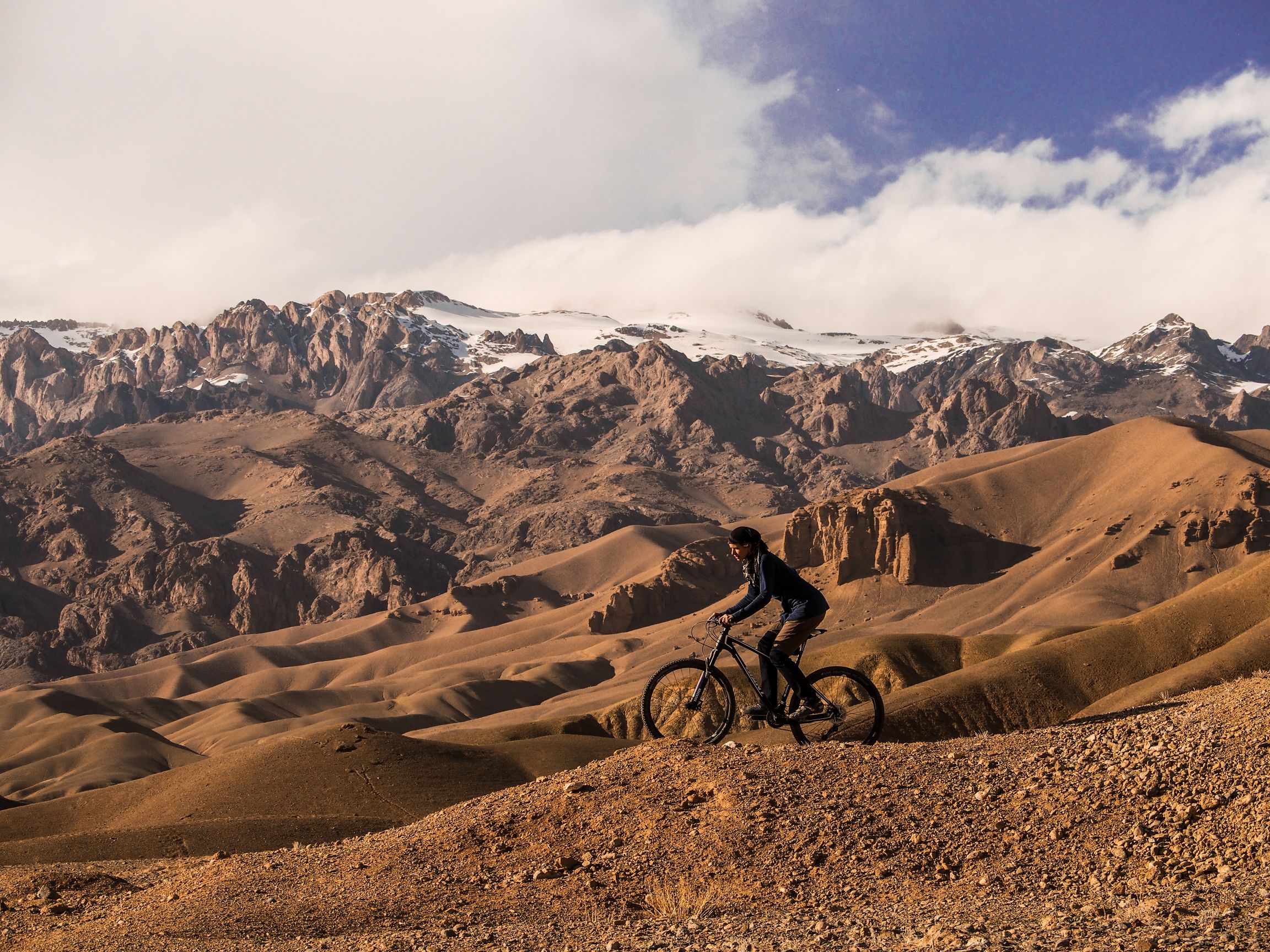 Galpin was the first person to ever go mountain biking in Afghanistan.

“I used that, and the mountain bike, to start asking why the bike was still, essentially, the last taboo for women. There was not one woman I met anywhere in the whole country that was allowed to ride a bicycle. It wasn’t even an issue from the Taliban era which hadn’t been resolved yet. Cycling had never broken the gender barrier.”

Eventually though, through pure luck, Shannon discovered that was changing. “I got invited to go on a ride with the men’s national cycling team,” remembers Galpin. “When I went along the coach was with a woman who was acting like his assistant – and she was – but she was also the captain of the first women’s national cycling team. I had been riding for four or five years looking for women all over the country. My jaw dropped.

“We are afraid that if the Taliban come, the first thing they will do is to kill the girls who cycle.”

“The women’s team was just a handful of girls. They were riding bikes that were too big. They had rusted-out derailleurs. The brakes often didn’t work. They didn’t even drink water on their rides and when I asked them what their aims were, they said they wanted to compete in the Tour de France. But they were riding. That was the start of five or six years that I spent working with them.” 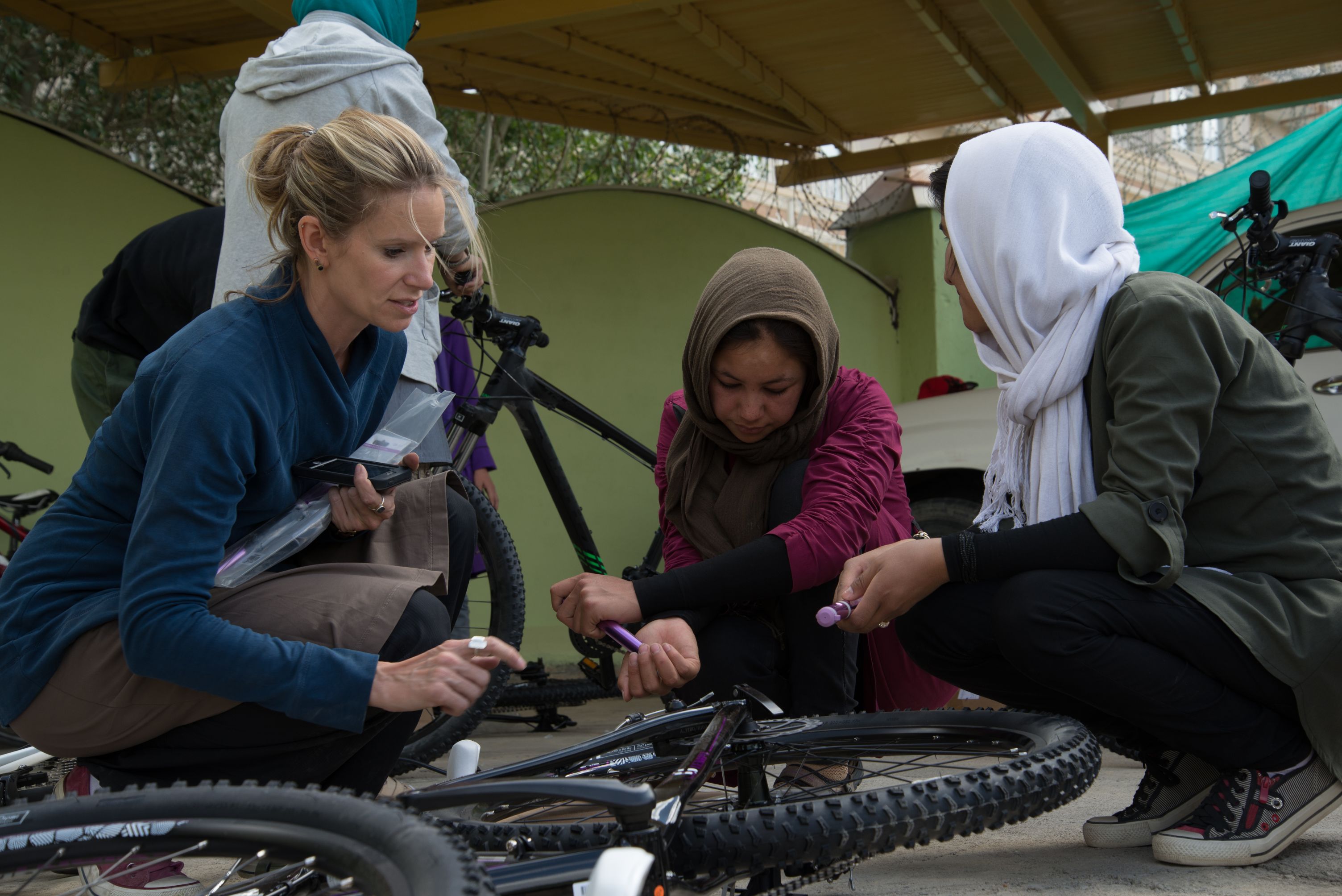 Shannon would bring over thousands of pounds worth of donated gear, including new bikes donated by Liv, the sister company of Giant. Naturally, it wasn’t without its perils. At one point a warlord stole the bikes and Shannon and a member of the men’s team had to steal them back. But bike by bike, progression was made.

The story of women’s cycling in Afghanistan is documented in the remarkable documentary ‘Afghan Cycles’, which was released in April 2018, and on which Shannon worked as a producer. The film interviews the women involved in the teams around the country, exploring their motives for riding the bike, tracing their progress, both on and off the bike, and showing in, at times uncomfortable detail the prejudice the women are up against.

While the Taliban no longer rule Afghanistan, they do still hold power in many parts of the country. And one particularly moving film clip shows a member of the women’s team admitting: “We are afraid that if the Taliban come, the first thing they will do is to kill the girls who cycle. They’ve seen us in the media. We don’t have a way out now because people know us as ‘the cycling girls’.” 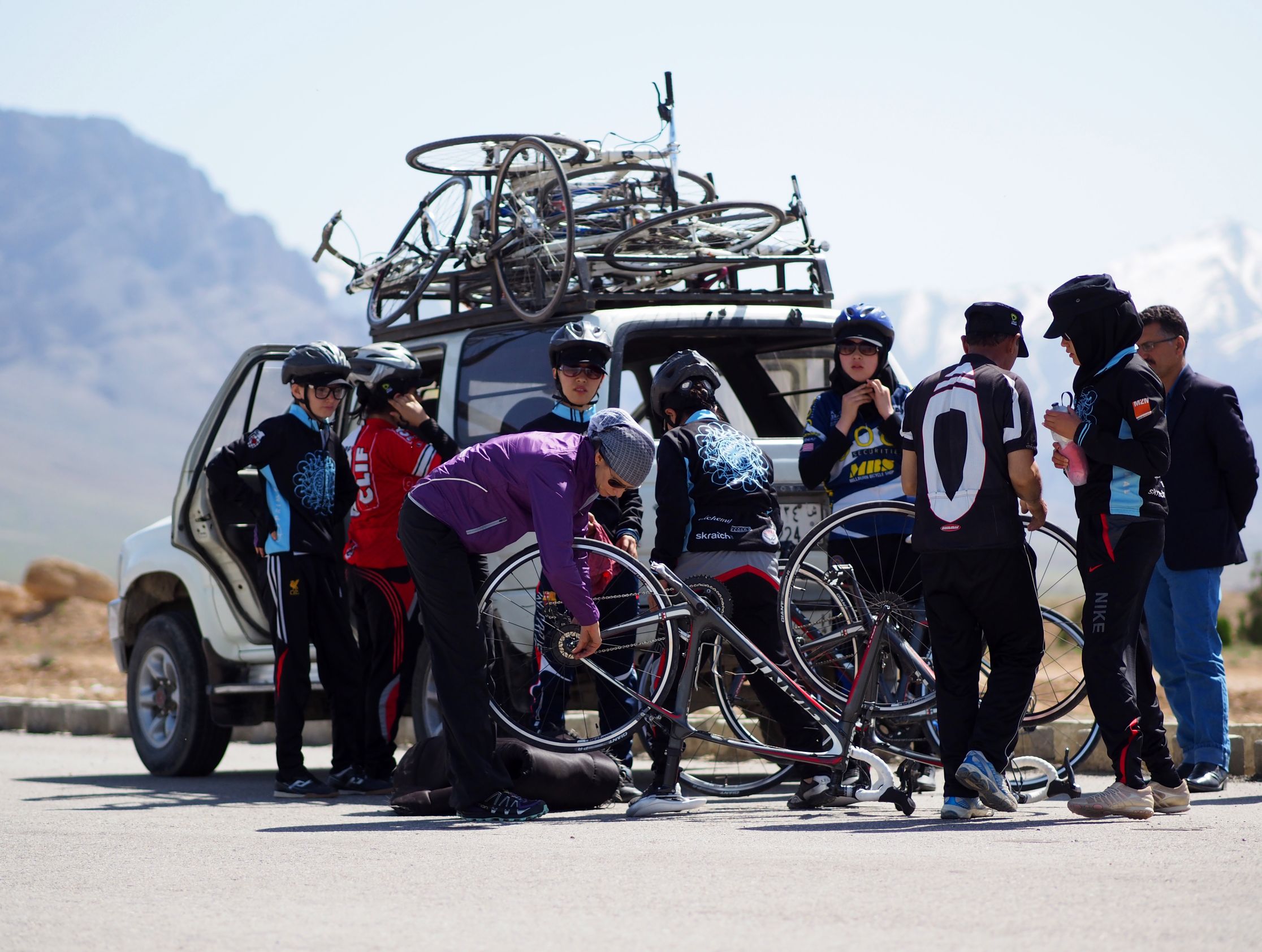 The revolution in women’s cycling in Afghanistan is well under way.

The film goes as far as actually speaking to a member of the Taliban, who says straight down the camera lens that he believes women should be shot just for wearing trousers in the bazaar in Kabul.

“It’s a very powerful interview,” says Shannon. “Often the girls downplay the risk. So when you hear a member of the Taliban talking, you realise… It’s just insane.”

‘Afghan Cycles’ is a film as much about feminism in Afghanistan as it is about cycling.

“They were tired of seeing boys being able to ride when they couldn’t. There was a curiosity, and this desire to change the social landscape of their country.”

Shannon references 19th-century feminist Susan B Anthony’s quote that “the bicycle has done more to emancipate women than anything else”, and emphasises how the Afghan prejudice against women’s cycling is no different to that faced historically by women around the world – it’s just taken Afghanistan longer to break it.

“A century ago when women were just starting to ride bikes in America, Britain, France, they were called immoral and promiscuous,” she says. “The perceived immorality around women riding bikes is universal. It’s just that in Afghanistan, they haven’t broken that gender barrier yet, and the danger for women riding a bicycle is much higher than elsewhere. There has never been an Afghan revolution on bicycles”. That is, until now.

‘Afghan Cycles’ follows the whirlwind journey of the women’s national team through international media attention and races as far flung as France. It also showcases riding elsewhere in Kabul, and introduces the viewers to a woman called Zhara, who started her own women’s cycling team independently in the region of Bamiyan. There, she teaches other women how to ride bicycles, and works within the system to rise up against gender violence and form a supportive cycling community, which even includes co-ed bike clubs. 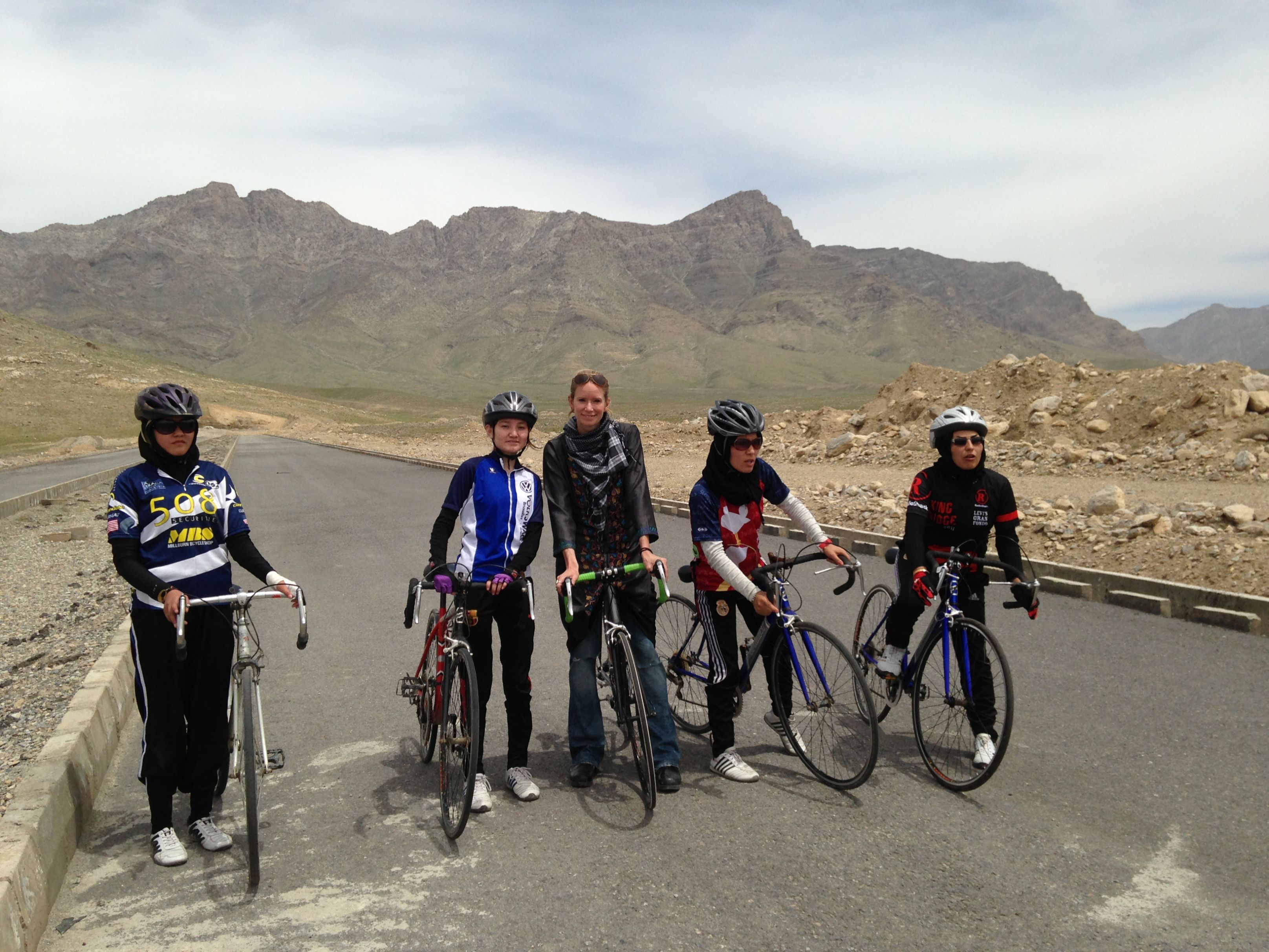 A day of training for the group in Afghanistan.

“There were zero women in the history of Afghanistan having ridden a bike, and then all of a sudden there were two teams and a bike club in the space of a year,” says Shannon. “And co-ed bike clubs? That’s insane. That doesn’t happen in Afghanistan.”

The first question Shannon asked the women she met who rode bikes was, in the face of not just danger but potential death, why they would risk it at all.

“Men throw rocks. Men threaten your family. Men threaten your honour,” Shannon says. “So why would you want to ride a bike? It came back to the freedom they felt, the fact that they were tired of seeing boys being able to ride when they couldn’t. There was a curiosity, and this desire to change the social landscape of their country.”

“All of a sudden they’re saying ‘I deserve freedom of mobility’? That’s huge.”

“Boys and girls would get together and ride to promote anti-corruption around an election, or for the ‘Right to Ride’ movement. All of a sudden you start to have a revolution.

“Women in Afghanistan often have to wear burkas and walk behind men and aren’t allowed to leave the home without permission. They know the risks better than anyone else, because just being a girl in Afghanistan is a risk. Then all of a sudden they’re saying ‘I deserve freedom of mobility’? That’s huge.” 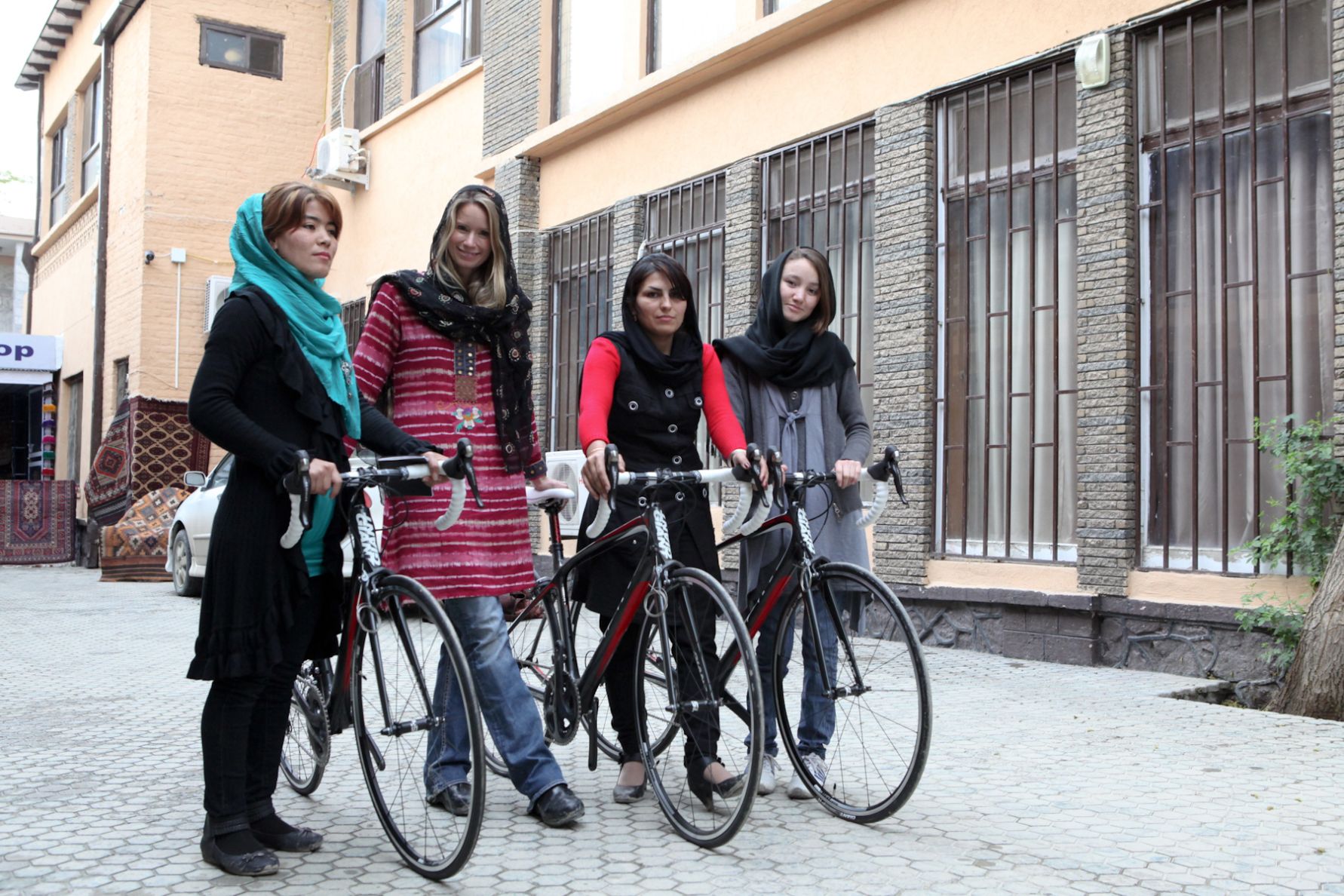 Many of the women featured in the ‘Afghan Cycles’ have now left the women’s national team. Some sought asylum in other countries after threats were made on their lives. Others fled Afghanistan for personal reasons. Each that dared sit on the saddle has made a poignant mark on the place of the bicycle in Afghanistan.

“These initial women who rode, they broke that barrier,” says Shannon. “There’s a second wave of women now.”

The problem is that when the international forces left Afghanistan, a lot of international aid left too. Security decreased. Travel became harder. Cafes were getting bombed. The upcoming year will see both peace talks with the Taliban and a national Afghan election, both of which, Shannon says, “holds women’s rights hostage”.

“My goal has always been that if you can normalise cycling through the sport, then you can get girls on bikes to get to school as well.”

“Everyone who can leave is leaving,” says Galpin. “It could all still collapse. And yet more girls are cycling than ever before. There’s a BMX team which started two months ago in Kabul. There’s a mountain biking team in Bamiyan. Both have girls and boys in them.” 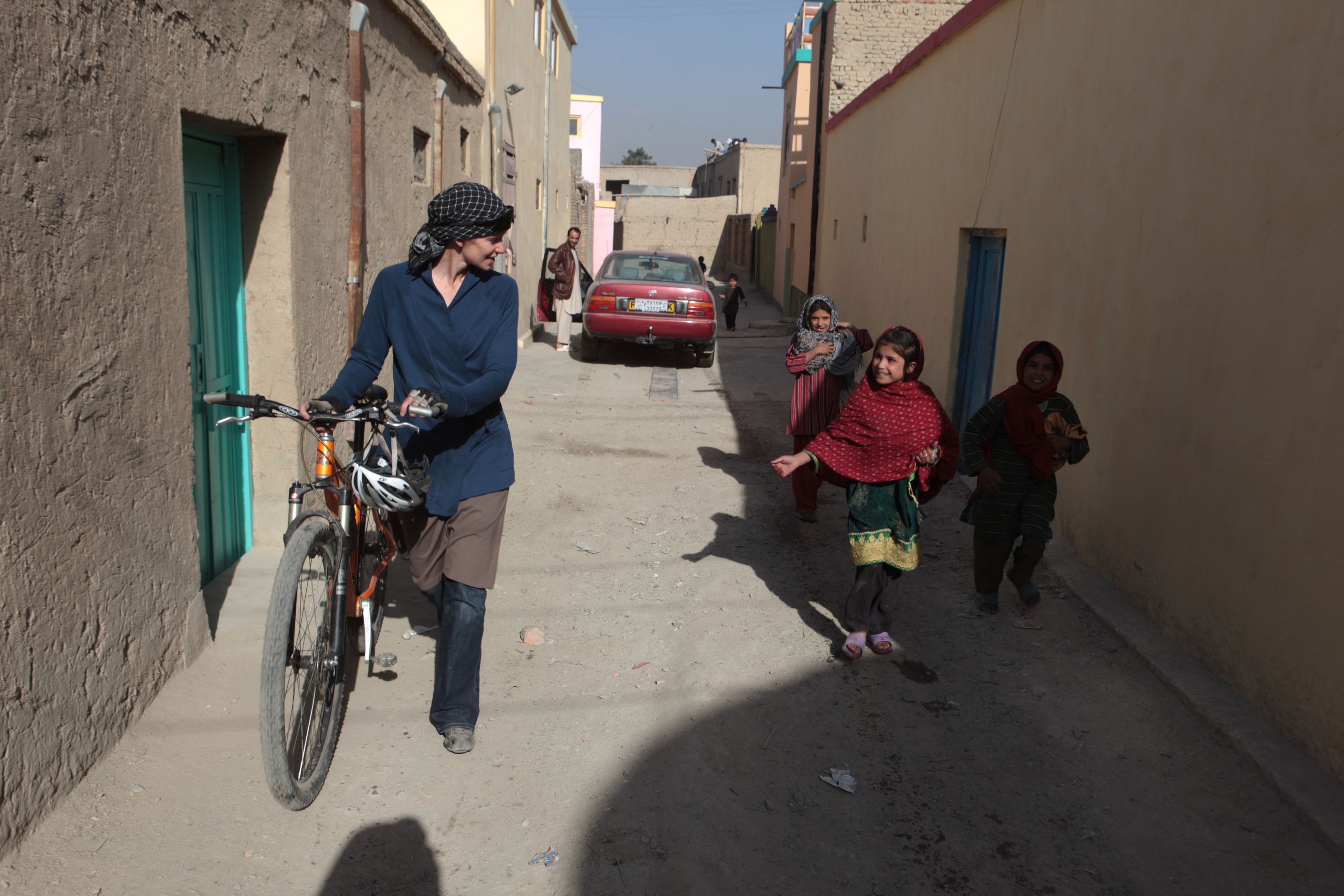 Young girls ask Shannon about her bike as she walks the streets in Afghanistan.

The women’s national team were nominated for a Nobel Peace Prize in 2016. They were named National Geographic’s Adventurers of the Year. All of this would have been simply unimaginable just five years earlier.

“My goal has always been that if you can normalise cycling through the sport, then you can get girls on bikes to get to school as well,” Shannon concludes.

“The social side of it could be normalised through sport and national pride. The Afghan people care. They don’t want to be known for drugs and war and the world is paying attention to them on this story – a positive story.

“No other Afghan sport has been nominated for the Nobel Peace Prize. And it may be controversial, but that matters to them. That change is happening now, and it’s only starting to normalise, but if it continues, then the movement will continue to grow.”

All photographs provided by Shannon Galpin. ‘Afghan Cycles‘ is now available to rent on YouTube from £1.49 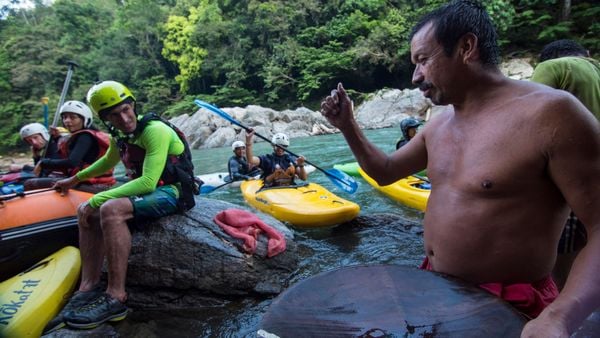 Once a hiding place for high-profile hostages, the Samana Watershed is now a thriving spot for adventure tourism

We speak to the co-founder of Callisto, a conservation NGO working in the Greek mountains to protect, preserve and educate people about the brown bear.