We caught up with serial adventurer, Zoe Tehrani, to ask about her range of experiences from kayaking the Norwegian fjords, hiking with huskies and summiting Mt Toubkal.

Hi Zoe. Thanks for speaking to us.

So how many trips have you been on now?

I’m not exactly sure how many trips I have been on now. I’ve been to trekking up Mt Toubkal during the winter and the summer, I’ve been kayaking in the fjords in Norway, I’ve been packrafting in Finland and I’ve been husky hiking in Tromso. Next I want to go and stay in a snow cave in Norway.

That’s great. It is a really cool trip by the way! What was the most recent trip?

I have just come back from the winter edition of Mt Toubkal.

Great. How did the climbing Mt Toubkal in the winter compare to the summer?

I would say overall, it was a lot tougher. The first day was easier I’d say because we didn’t have the summer sun pounding down on us. But the second day was really tough. But the rewards more than made up for it. The views of the snowcapped Atlas mountains were, for me at least, a lot more breathtaking. And we got to slide down the mountain on the way down, that was so much fun. But it is a very different trip, both trips certainly have their perks.

But of any trips I’ve ever done in my life, I’d say climbing Mt Toubkal in the winter was the best.

I think it’s because it was the most challenging trip I’ve ever done, there was a genuine sense of achievement when I completed it.

Usually whenever I do anything that’s challenging, I usually just power on through and I think that the pain is just temporary. But with this one, I actually felt at moments that I couldn’t do it.

But there was a stark contrast between that feeling, and then the feeling of getting to the top. When I got to the top, I just felt such a sense of calm and peace.

Our guides were very encouraging by the way, they were another reason I felt like I could really push through and get to the top.

That’s great to hear. So now you’ve been on so many trips, what has the impact has going on so many mini-adventures had on your life?

Well, I love travelling, and I was thinking about moving abroad because I was tired of living in the UK. I didn’t really feel like I was a city person anymore, but having these weekend trips has sort of been like my escape. It has provided a really great way to get outdoors, and do really crazy, adventurous things. So I suppose it has made my life more fulfilled in a way. I’m certainly happier as a result.

We are certainly pleased to hear that! And would you prefer if the trips were longer, or do you like the concept of the weekend adventures?

No, the length of the trip is one of my favourite things about the trips. I love that you can have so many experiences in so many different places, and not have to take too much time off work.

And how is your mood different from when you leave the office on a Friday, compared to when you return on a Monday or a Tuesday.

I feel like I’ve had a much longer trip than I have actually had. When I tell people about these things that I do on the weekend, they always say “Are you not tired, do you not feel like you need more of a break?”

But it’s really the opposite, you feel like you’ve had a much longer break than you’ve had. So as a result, you actually feel really refreshed. Also, normally when you go on holiday, it can be quite stressful to make sure everything goes to plan. But what ultimately makes your trips more relaxing is that everything is taken care of.

So the fact that everything just runs seamlessly means that you can really just sit back, relax and enjoy yourself.

So you’ve also had the opportunity to meet a fair few of our hosts. What were your impressions of them so far?

I found them all to be very friendly and very encouraging. You know, they are just nice people to be around. Obviously, they are always from very different backgrounds but generally seem to be cut from the same cloth.

They seem to always do as much as they can to accommodate you as well. As I’ve been to Mt Toubkal a few times, I know Mohamed relatively well now.

But yes, also the guys out in Tromso were really nice as well, I really liked them.

So I understand you did the husky hike there, is that right?

Yeah I did that back in November. It was so enjoyable. I was meant to be doing the dog-sledding, but we couldn’t because there wasn’t any snow. But the alternative was just perfect. We actually ended up doing it with the puppies because it was so icy. The heavier dogs have much more trouble in slippy conditions. So it was great to have so many adorable puppies running around whilst you’re on the hike. Such a great experience.

And did you see the northern lights?

Yep I did. I saw them every day. It was great because I had to stay in Tromso for a couple of extra days due to flights, so I say them every day for 5 days or so. It’s weird though because it’s so far north and it was mid-winter, it gets dark so early. So you do all of your activities in the morning, then you have lunch, and it starts to go dark so you feel like it’s time to go to bed.

Another thing I’d definitely recommend for anyone going to Tromso is visiting the frozen lake next to the city. They let you go ice skating when it’s frozen in the middle of the winter. That’s really great.

And have you kept in contact with any of the people you’ve met on the trips at all?

I have kept in contact with a fair few people that I have met on the trips. In fact, we were supposed to be doing a three peaks challenge with a few of the guys we met on the trip, but it didn’t work out in the end due to dates.

It’s certainly one thing I really like about the trips because the group sizes are just right. They aren’t too big so you aren’t made to feel like a just a number, but they’re not so small either.

You bond with other people on the trip in a unique way because you’re sharing such a crazy experience together.

On the last trip I did, I actually did it by myself. At first, I was concerned because there would no-one to share the experience with. But actually, this meant that I could go at my own pace, and go as fast or slow as I wanted. As a result, we got to see a lot more of the Atlas mountains. That was great because it meant I had a lot more freedom during my stay.

So for you, what are the pros and cons of travelling by yourself versus with a group?

The downside of doing it with a group of people is that sometimes you can be slowed down. That’s not really a big issue really.

So you say your friends and generally aren’t into adventure holidays. What’s their response when you get back from these trips?

I work as a physiotherapist, so I talk to my clients all day. They are always amazed at how much I manage to fit into my weekends. They always ask me how I find these trips, so I give them your website.

*Brownie points awarded to Zoe at this point*

They are staggered at how much you can fit into a weekend. They always think it’s sort of crazy or something, but to me it’s just normal.

Time for some market research. If you could go on a dream trip, what would it be?

I’ve got one, but it certainly wouldn’t take place over a weekend.

Well, I’d like to go to Chile, buy a motorbike and drive all the way to the southern tip of the country, then get a boat to Antarctica.

Go for it! Thanks for speaking with us Zoe.

Keep up to date with Zoe’s travels on Instagram. Check out our full range of adventures here. 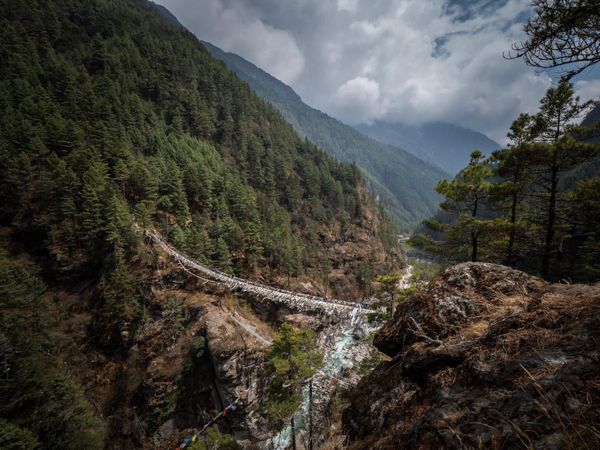 But what of that altitude? The truth is that you will feel it. And it is a challenge, but one of an attainable nature for anyone willing to take on the trek, and in all honesty, the views really are worth it.

If you're gonna do Christmas, do it like this.