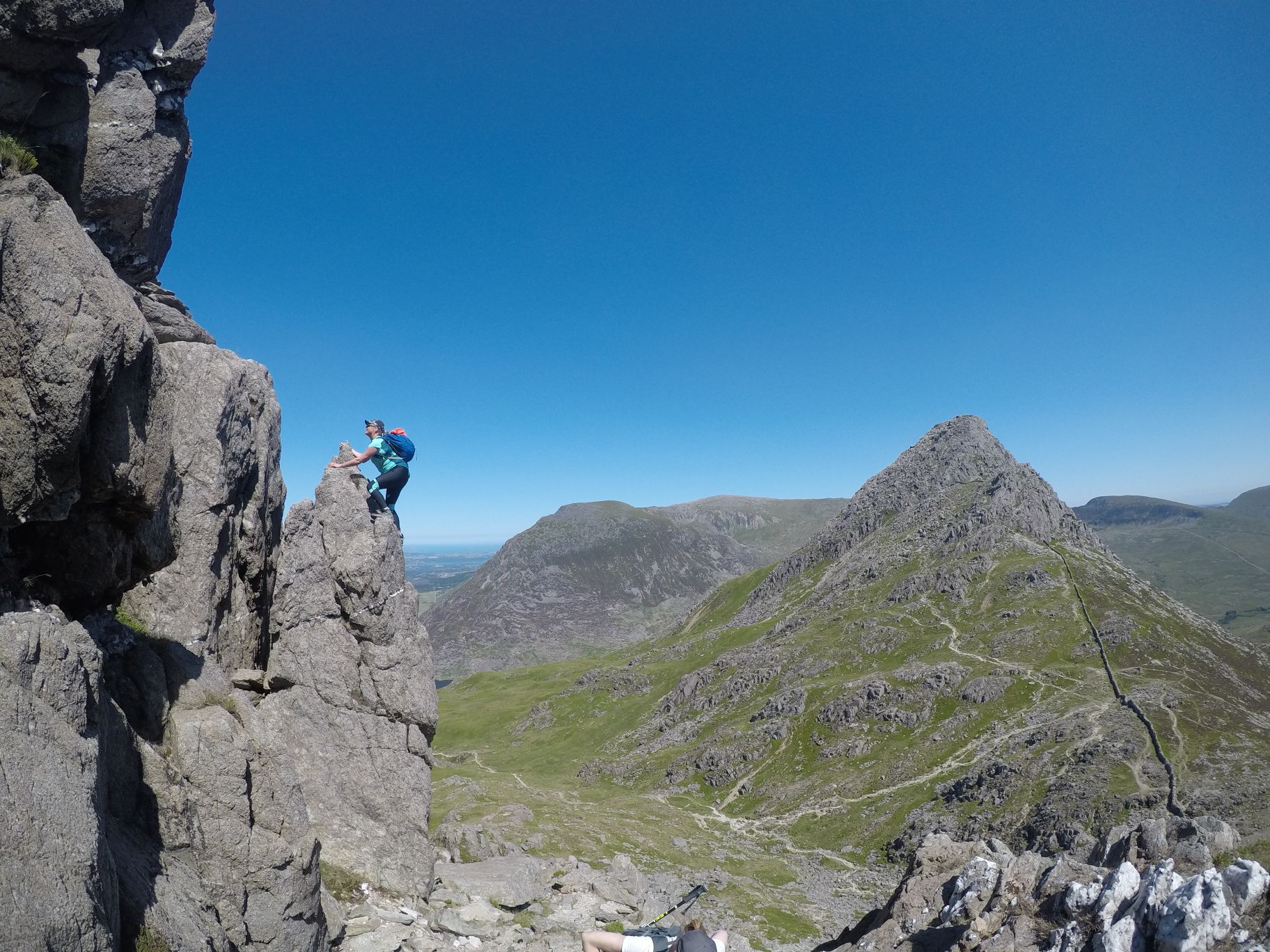 Holly Budge has climbed, ridden and skydived around the world. Photo: Holly Budge

Holly Budge is an adventurer and conservationist currently living between the UK and New Zealand. In 2008 she became the first woman to skydive next to Mount Everest. In 2017, Holly then returned to Nepal to summit the highest mountain in the world on foot. In between, she’s ridden semi-wild horses 1000km across Mongolia and founded the organisation ‘How Many Elephants‘, aimed at educating a global audience on the devastating impacts of the elephant ivory trade.

Here, in the first of our Adventure Open Mic series, Holly tells us how self-belief and a ‘say yes’ attitude led her to a life of adventure…

I was an adventurer from an early age. When I was young I used to compete in tetrathlons – running, riding, shooting and swimming. I loved being in the outdoors. I had a stupid amount of energy. Competing taught me a lot very early on about the importance of discipline, patience and teamwork; about putting in the work to get good at what you’re trying to achieve. I was really competitive too, so it suited me well being in a competitive environment.

When I was 21 I went travelling in New Zealand. I ended up doing a tandem skydive, like many people do, but that 60 seconds of adrenaline and of sheer terror completely changed the course of my life. Not only was I blown away by the experience of throwing myself out of a perfectly good aeroplane, I was also blown away that people were actually getting paid to jump out of aeroplanes every day of the year. And funnily enough, my careers advisor at school had actually mentioned that to me as a possible career move down the line. 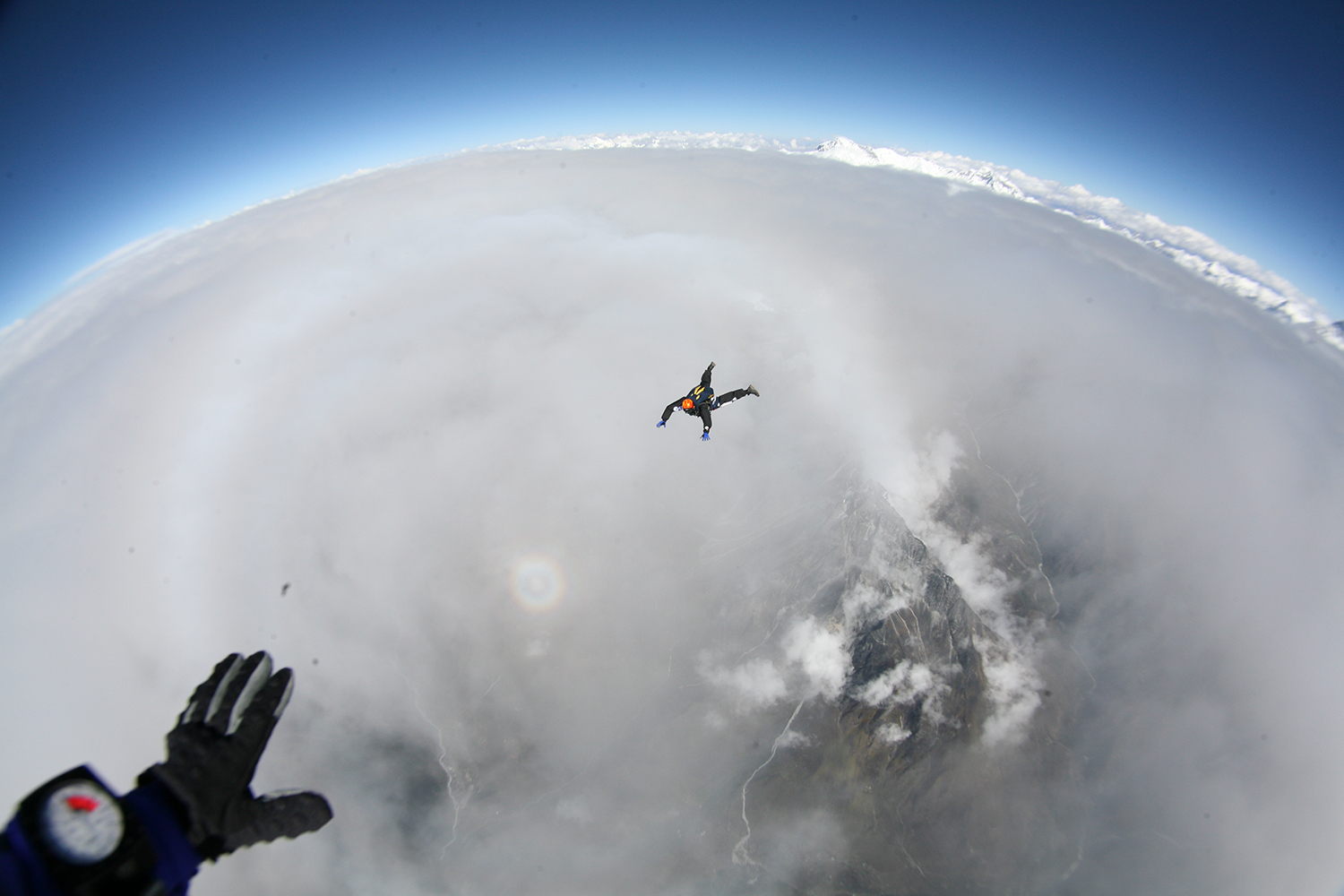 After coming back to the UK I spent a while tying up loose ends and earning enough money to go back out to New Zealand and do my skydiving training. After lots of hard work, dedication and self-belief, I eventually got my dream job. I was getting paid to jump out of aeroplanes up to 10-12 times a day every day. That gave me this massive self belief and this huge self confidence that I could achieve anything – whatever I put my mind to. Or that it was at least always worth trying.

My motto is ‘think big, dream bigger’. So when I heard about the opportunity to skydive next to Mount Everest I knew that it was an opportunity that I was not going to miss out on. When I rang up the organiser it quickly became apparent that there was no other women booked on this trip, so I knew there and then that was my hook for getting sponsors. He said “great, so can I count you on board Holly?” I said, “count me in”, and he said, “that’ll be £24k”! I’ve never had £24k bouncing around so I knew I had to get sponsors onboard, without question. 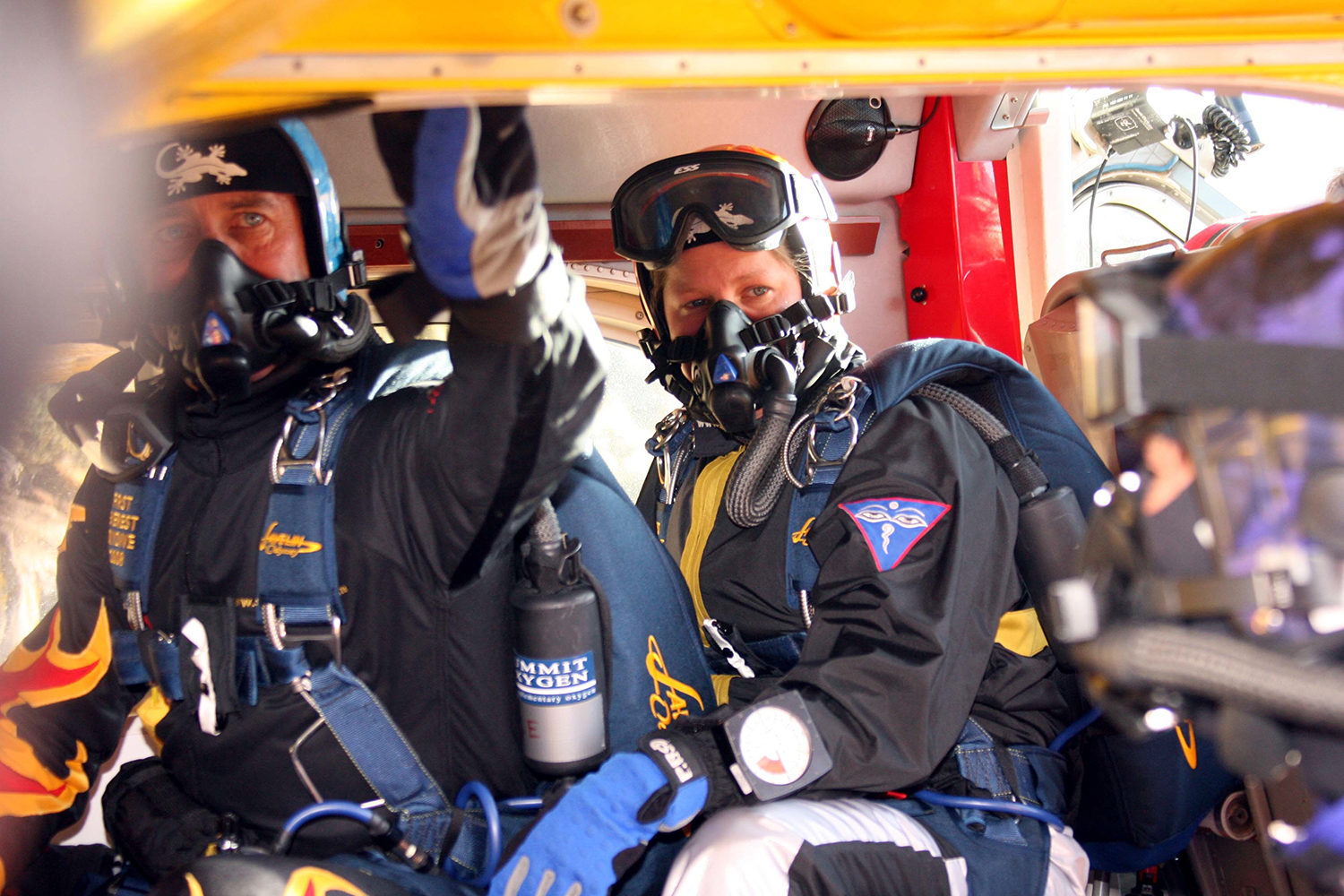 Holly preparing to head up in the plane, to almost 500ft above Mount Everest. Photo: Holly Budge

You can sort of see my pattern here. I say “yes” and worry about the rest later. I managed to get the sponsors on board, and I became the first woman to skydive Mount Everest. That opened up other doors. Which was good, because after I got home from that expedition I had the post expedition blues. It’s quite a common thing. You put so much of your time and yourself into the build up and then it’s all over. You think “what am I going to do now?” but then two weeks later I got another call. It was to ask if I would like to take part in another world-first adventure. They said it was a 1000km horse race across Mongolia… and I said “yep, count me in.”

Physically, riding 1000km across Mongolia was a huge test. I was in the saddle for 13 hours a day for nine days straight. But after I had achieved both of those expeditions, two world firsts, you just feel a bit more confident.

As much as I love adventure it doesn’t scratch my creative itch. For me it’s really important to have a balance of the creative side of life and the adventures. So I went back and did a degree and a masters in sustainable design during all of this as well. It’s only recently that I’ve found a way of aligning the two [via ‘How Many Elephants’] – which is pretty awesome. It’s taken me 20 years to figure that out. 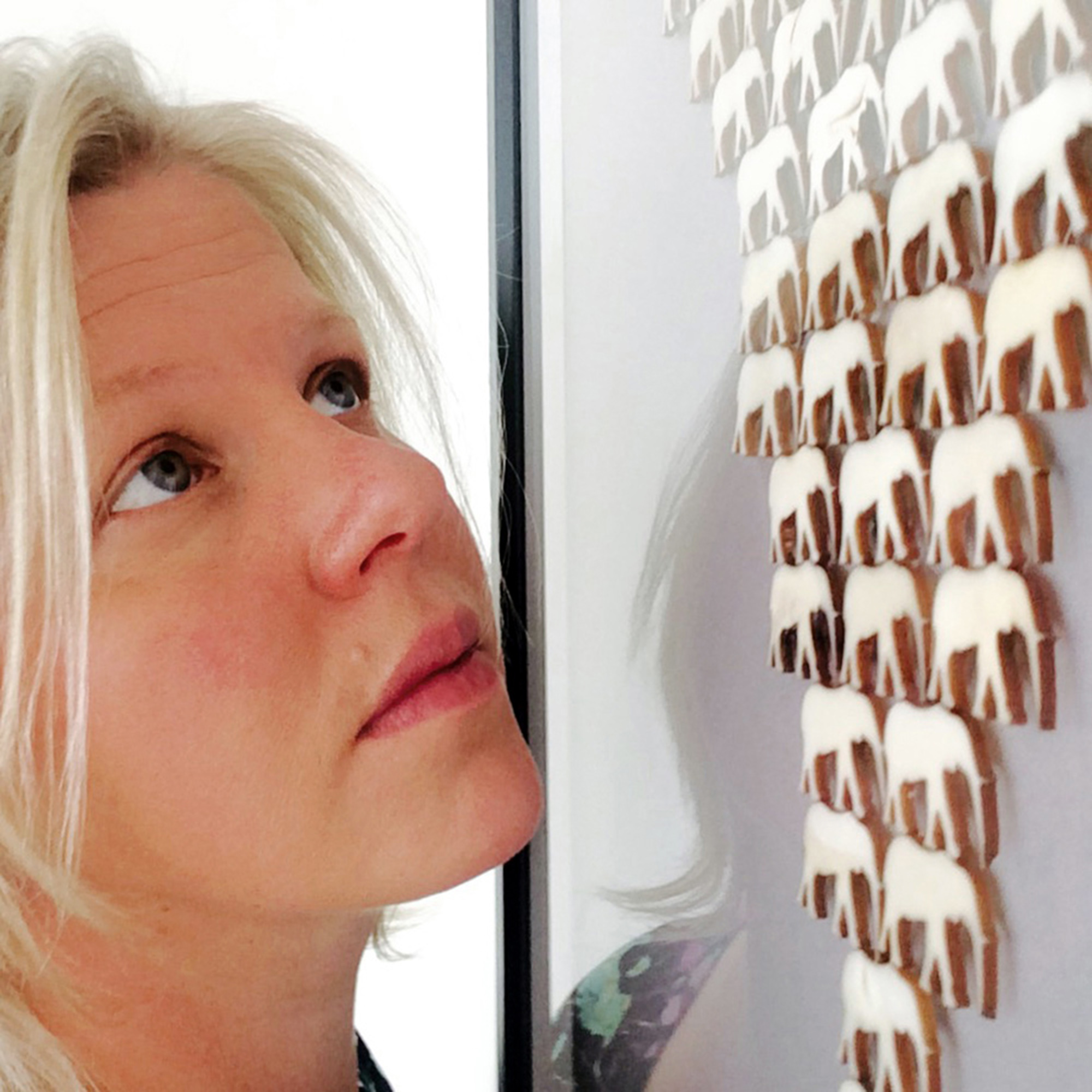 Holly started How Many Elephants while studying a masters in Sustainability. Photo: Holly Budge

Some people say ‘oh you’re so lucky and you’re very passionate’ but it’s been a long journey and for a long time, it was doors shutting in your face. It was like hitting your head against a brick wall. It’s easy to look at someone’s website or whatever and think that it must be so easy for them, but behind that, there’s always a story.

Climbing Everest was tough. 47 days on the mountain, above 5000 metres is not easy for anyone. But I think the common thread is the positive mindset. If you let those little negative voices creep in it’s really tough to do anything. When I climbed my first two mountains I reached the summit well before the rest of the team, and at the time I didn’t realise why or how, I was just like, “wow, this is great and touch wood, I’ve never had any altitude problems”. There were some fit guys in the team, big, gym bunny type guys, and they were like – “but how do you do that? I don’t get it, what are you doing differently?” 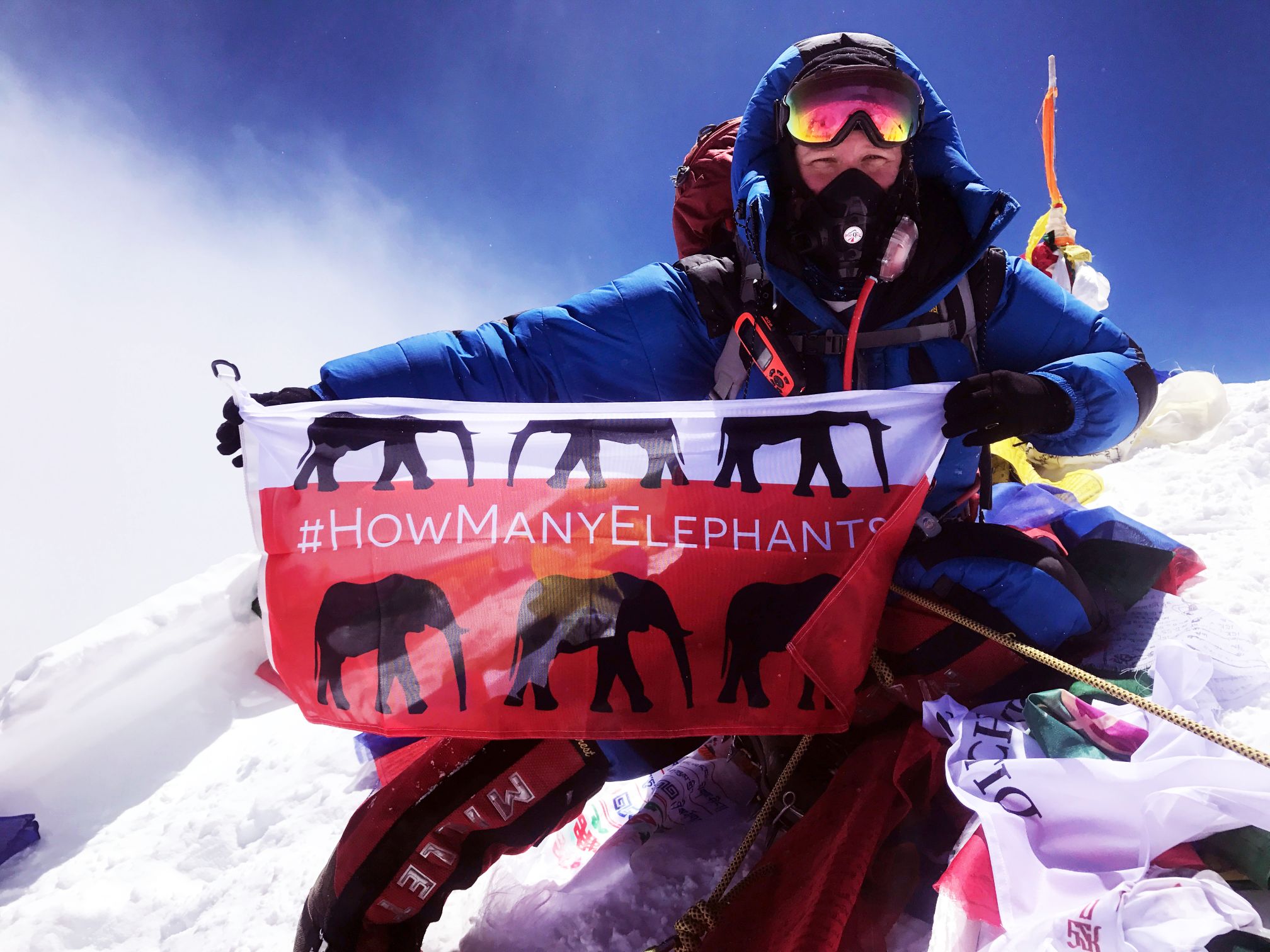 Holly at the summit of Mount Everest. Photo: Holly Budge

When you leave for your summit push you leave late at night so that you can get to the summit and back the next day. So there’s nothing to look at, just the light darting around from your head torch. What I do now on every single mountain I climb is, if I’m behind a sherpa or climbing partner I just look at their feet. When they move their foot, I move my foot. When they move their foot, I move my foot. That is how I climbed for the first two mountains – I was completely focussed on their feet. It sounds silly but it’s like the drafting technique they use in cycling – when the Tour de France cyclists get in right behind each other.

It’s the same thing mentally, as well. If you get separated from the group, especially when you are high altitude, very quickly you start thinking “Why am I not good enough? Why am I slower? How am I going to make it back to the group?” All these irrational fears start creeping into your head. So I use this technique to quieten my mind, and I’m a little bit less selfish now in terms that we rotate – so the person behind follows me, and then I follow them and we go like that up the mountain.

The purpose of this story is keeping the negative voices out and keeping a quiet mind. I am now very conscious of that. So whether I’m at home or on an expedition, whatever I’m doing, I’m conscious of these negative voices. We all beat ourselves up and bully ourselves sometimes. But I try and quiet that down, and that’s so important when you’re on these expeditions. It’s having this self-belief, self-confidence, a quiet mind and a positive mind set.

Keep up to date with Holly Budge on her website on Instagram, or if you’re inspired to check out the Everest region, checks out our treks in Nepal now.