Vertigo-inducing via ferratas are typically only found in the Alps and the Italian Dolomites, but you can now take on the only via ferrata in Scotland if you head to Kinlochleven, in the heart of the Scottish Highlands. Be prepared, though. It’s on a cliff face next to the 60m Grey Mare’s Tail waterfall.

A via ferrata is an adrenaline-fueled combination of scrambling and rock climbing. It’s similar to sky-walk rope courses, but on the edge of a cliff. You ascend on a set route on a rock face using steel ladders, holds and wooden bridges which are pre-fixed in place, while secured to a steel cable which keeps you completely safe while you go.

The man responsible for installing the via ferrata in Kinlochleven is Ben Starkie. Ben’s an experienced adventure guide based in the Scottish Highlands.

> Check out our full guide to the best hiking in Scotland

“I used to go and do via ferrata when I was small, and then when I was guiding in the Alps,” Ben tells us. “So I knew a lot about them and I just thought it’d be a wonderful thing to have in Scotland.

“My background is really in canyoning and rafting and kayaking. We were kayaking by the Grey Mare’s Tail waterfall for years before I thought about putting a via ferrata in there. Every time I went down, I’d think ‘these are really good cliffs’ but nobody ever really gets to see them. Only the canyoneers who are in there, and that’s only a handful of people because it’s a really extreme canyon. The via ferrata that we’ve got in place is great for that. It’s so close to the road, so people are able to access it who aren’t normally up in the mountains.”

The phrase ‘via ferrata’ is Italian. It literally translates to English as ‘iron path’. This makes sense, because most modern via ferrata have a steel cable that runs along the length of the route, fixed to the rock at regular intervals.

Via ferratas allow adventurers to safely get to environments which they wouldn’t have been able to access otherwise – without serious rock climbing skills.

“A lot of people who do it aren’t climbers, but it’s giving them a taste of what climbing is about,” says Ben. “Because it’s up high and exposed on a big cliff and it gives them the ability to experience that. Then maybe they will move on to do some climbing after they have tried out the via ferrata.

“A lot of people who do it aren’t climbers, but it’s giving them a taste of what climbing is about.”

“You do need a head for heights, but everything that’s on there is really solid. Even compared to a climbing wall, for instance, where you get handholds wobbling sometimes. There isn’t any of that because every hold is just a big piece of iron rebar that you can grab hold of. There’s nothing there that makes you feel tired or wobbled out.

“But you are going up 100 metres vertically! A lot of people who do it are scared of heights. Some are terrified the whole way, but they still do it! Some people say that it’s really helped them conquer their fear of heights.”

The via ferrata is not far from adventure hubs Glencoe and Fort William, the latter being the gateway town to Ben Nevis. It’s the first via ferrata in Scotland and second in the UK, with the other in the Lake District. The Grey Mare’s Tail waterfall right beside the route is the third highest waterfall in Scotland.

The via ferrata route itself is a 450m journey on the very edge of the rock face, negotiating the way on only tiny cable bridges – bars locked into the walls, as seen above – and on steel holds. The ledges can be incredibly narrow at times, and balance and concentration is imperative if you don’t want to put your harness to work.

“Via ferratas are graded, and ours would be graded as quite a hard via ferrata in terms of exposure because it’s quite steep and sporty,” says Ben. “Ours is a combination of horizontal bridges and steeps. The route is a combination of planks, wooden bridges and alpine bridges, and obviously everything is made of wire and then, in between that, linking those bridges together, are the sort of rebar staples that we’ve got in place.”

The fear of the via ferrata should turn to exhilaration as you progress through the route and get the hang of making your way on metal. Think of it like a big metal obstacle course on the side of a cliff. Though admittedly that sentence sounded more reassuring when we thought it up in our heads.

Ben’s certainly had a lot of positive responses from budding visitors to Kinlochleven so far.

“All the feedback is awesome,” he tells us. “One of the things that I really pride the via ferrata on is that we’ve had people who have been on via ferratas all over the world tell us that ours is one of the best or the most fun ones that they’ve ever done, which is awesome. It’s an awesome achievement for us.” 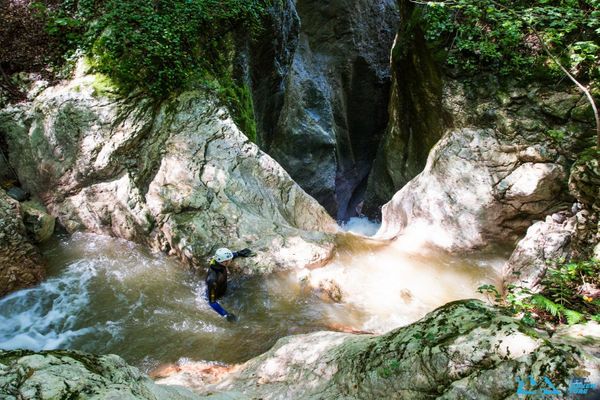 Canyoning is an adventure & exploration sport where you get in a wetsuit and get down a canyon or river. Here's what to expect when you first go canyoning.